Chapter 2 – Tools of Manufacture and Trade in the Indus Civilization

The Indus Valley Civilization was a Bronze Age polity and numerous examples of bronze artifacts have been discovered at several of the main Indus sites. Examples of these artifacts include bronze images, tools, utensils, and several types of weapons. Interestingly, bronze tools are not as numerous in the Indus Valley Civilization as in Mesopotamia because neither copper nor tin, the two metals used to create the alloy of bronze, were easily obtainable. In terms of day-to-day technology, this suggests that the people of the Indus Civilization used both bronze and stone tools, implements, and weapons across multiple crafts areas, and does not seem to have been an elite status symbol. Reinforcing this lack of elite status is that, throughout the Indus Valley region, archaeologists have discovered numerous kits used by bronze smiths for the manufacture of bronze goods. The presence of these kits suggest that, even if bronze was not as common as other metals, bronze smiths constituted an important part of Indus society.[1]

The Indus Civilization also developed a standardized system of weights and measures, which was then dispersed throughout the region (fig. 4). One of the clearest examples of these standards can be found in building construction. Due to a lack of stone at a number of sites on the plains surrounding the Indus River, several of the largest Indus cities, Mohenjo-Daro and Harappa, were built using bricks. These bricks, which were either dried mud or kiln-baked, were made using a standard ratio of 1:2:4, regardless of their actual size.[2] 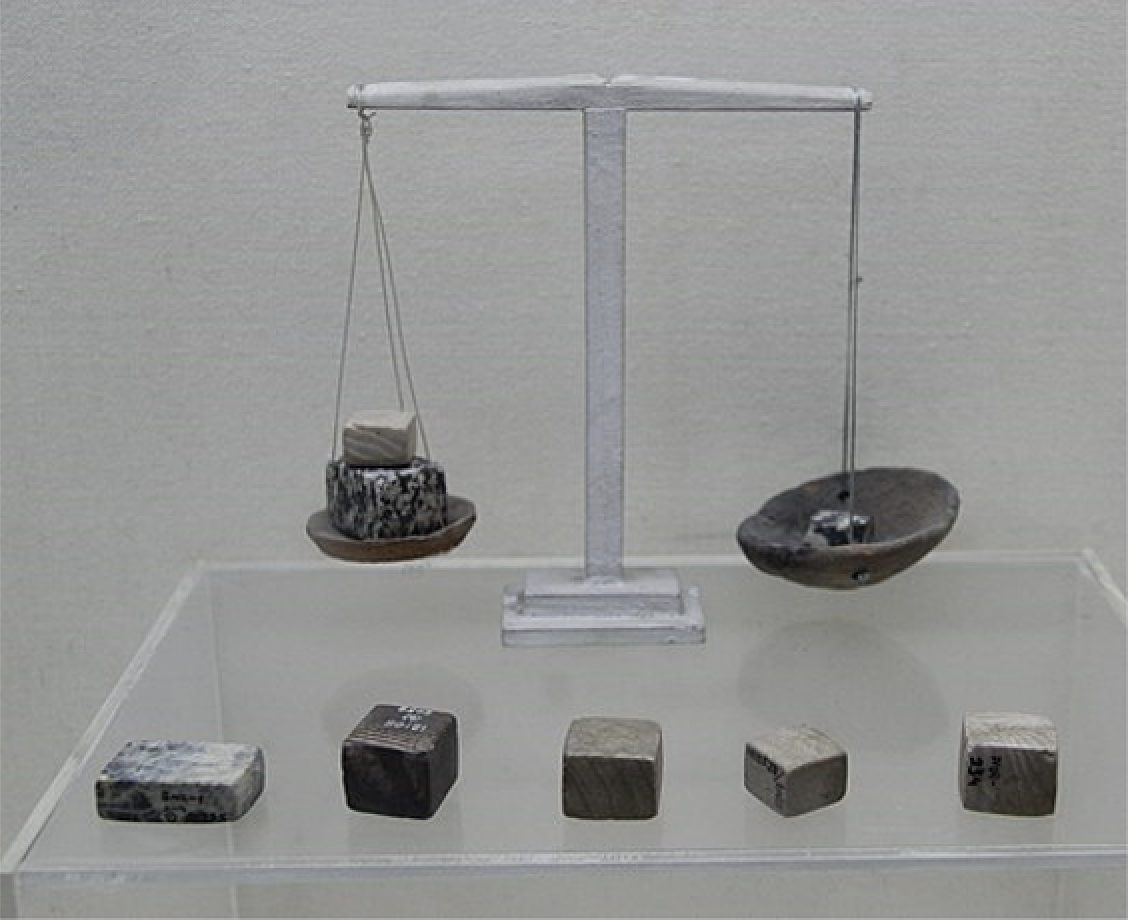 In addition to the manufacture of bronze goods, other types of craft technologies developed during the Indus Civilization. The technologies used to create pottery were well developed during this period, and the potters represented a visible artisanal group. Indus pottery was produced in large quantities using the potter’s wheel, and it was generally thick-walled, plain, and lightly decorated. Potters cast utilitarian household items, such as cookware, storage jars, dishes, and water pipes for house drains. The widespread use of these items was, presumably, what prompted the spread of Indus pottery wherever their civilization was established.[3] Outside of pottery, archaeological evidence of textile production during the Indus period can be seen in the existence of numerous examples of terracotta spindle whorls, which were used for hand spinning thread, and a piece of woven cloth recovered from Mohenjo-Daro. Like many craft technologies during the Bronze Age, the production of both thread and cloth would have been completed in the home rather than in a factory or warehouse.[4]

Finally, one of the most striking scientific developments of the Indus Civilization was its complex sanitation system, which could be found in all Indus cities. Every household, large or small, had terracotta pipes that flushed used water into the city drains, which ran alongside the streets. These drains were covered with bricks, or stone slabs, and the drains ran to a central soak pit within the city. The clear importance of sanitation is one of the unique attributes of the Indus Civilization, which was not found in any of the other ancient centers of civilization. It would not be until the Roman era, thousands of years later, before a comparable sanitation system was developed again.[5]

The Indus Civilization, like Mesopotamia, supported itself primarily through farming. However, trade was conducted locally and internationally by Indus traders, using water transportation and ox-drawn wagons to transport finished goods or food for raw materials. The discovery of several Indus seals, small square amulets featuring Indus script, in Sumerian gravesites provide evidence of contact between the Indus and Sumerian Civilizations of Mesopotamia. Some two dozen Indus seals have been found in cities such as Susa, Ur, Nippur, and Kish, while Mesopotamian literature describes instances of trade conducted between merchants of Ur and those from foreign countries. Sargon of Akkad (circa 2350 BCE) is said to have taken pride in the fact that the ships of Dilmun (Bahrain), Magan (Makran), and Meluha (India) traded in his capital city of Akkad.[6]