Chapter 14 – The Discovery of Deep Time

Deep time refers to the successive realization on the part of geologists, in the eighteenth and nineteenth centuries, that the age of the Earth has to be described in terms of millions, even billions, rather than thousands of years. That the Earth was about 6,000 years old was a time-honored biblical claim, which 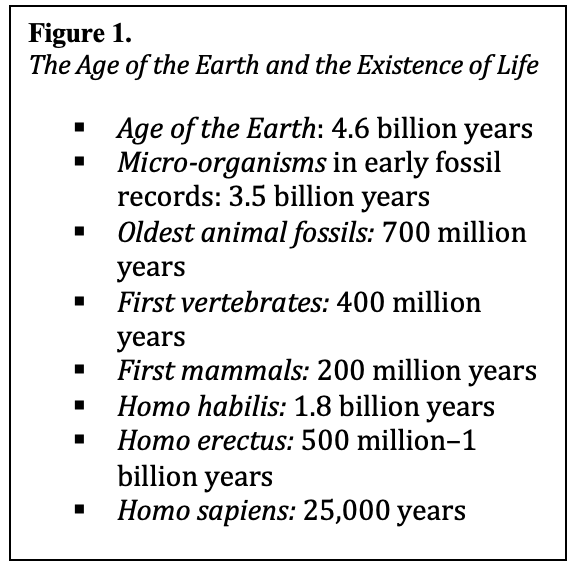 The discovery of deep time, that is, the realization that the Earth must be much older than Ussher’s calculation, was basically the result of the lost battle of scriptural chronology against evidence-based natural chronology. The old story that the history of the Earth could be told in terms of the creation and the Flood (deluge) soon met with some serious anomalies: for instance, layered fossil marine shells were found in inland rocks or extinct volcanoes, which were recognized for the first time for what they were: evidence of geological change.  Once the facts of geological change were recognized, questions about their temporal sequence became inescapable: what agencies were responsible? Were they the same as those acting now? And how long had they taken to produce their visible effects?[2]

Many different explanations were proposed. For instance, the French naturalist Georges-Louis Leclerc, Comte de Buffon (1707–1788) estimated that a geological history based on the principles of physics would extend the scale of natural chronology to 75,000 years.[3] His calculation was based on the knowledge of cooling rates of different materials found on earth, including iron. The problem for those scientists who were trying to determine the age of the Earth was to identify the right kind of evidence, such as fossils and rock strata, and to relate it to the history of the Earth.

It took some time before the discovery of a widespread geological order in the nature of the Earth’s crust came to be acknowledged as evidence of a temporal order in its formation—instead of being accepted unquestionably as the pattern imposed at the original creation (fig. 2). And it took most of a century for geologists to establish what agencies had been involved in these processes of formation.[4]

What were the agents of geological change? It took geologists some time to establish the mechanism of change and consequently a few competing systems emerged, all of which tried to construct a theory of the Earth’s history based on the available evidence. Two predominant schools of thought can be distinguished: Neptunism and Vulcanism (or Plutonism), which both tried to account for the rock formation on the surface of the Earth.  Neptunism put the emphasis on the impact of water and the sedimentation of minerals. Its main proponents were Abraham Gottlob Werner (1749–1817) and Thomas Burnet (1635–1715). Vulcanism stressed the role of fire or volcanic activity in rock formation. One of its main proponents was John Hutton (1726–1797), supported by John Playfair (1748–1819). Furthermore, these theories can be classified according to whether or not they tried to preserve and defend the biblical chronology.

Theories of the Earth representing the framework of biblical chronology

Thomas Burnet was an Anglican clergyman and proponent of Neptunism. He published, between 1680 and 1690, his book The Sacred Theory of the Earth. Burnet started from the assumption that only the Bible is true. But he dismissed the appeal to miracles. His strategy was that the Earth’s scripturally specified history could only be adequately explained when natural causes are identified for the entire panoply of biblical events.[5]For instance, to account for the deluge, Burnet established a physical cause: the Earth’s crust cracks, water rises from its layer in the abyss to cover the Earth, and then retreats again to leave the modern continents (with mountains as edges of the cracked crust) and oceans. Thus, Burnet became one of the first thinkers to detect in the material world a sequential history.

The Danish scientist Nicolas Steno (1638–1686) also thought that water played an essential part in the formation of the Earth’s crust. Unlike Burnet, who reported far fewer observations, Steno was actively involved in field work (mainly in Tuscany). His work on the formation of rock layers and their fossils was crucial for the later development of geology and paleontology. Steno’s most famous contribution is his law of superposition, which holds that rock strata were evidence of a temporal sequence: the deeper the layer, the older it was. Steno also found fossils trapped in the rock strata. He argued that fossils could be viewed as snapshots of life at different moments in the history of the Earth. Like others, Steno regarded fossils as remains of once-living organisms. But Steno (who in 1667 converted to Catholicism and gave up his scientific work entirely) remained committed to the biblical chronology. Like Burnet, he forced the entire geological history into the straitjacket of a 6,000-year time span. He held that rock layers, which contained fossils, had formed during the Flood, while lower layers, which lacked fossils, were formed before life existed.

Against such views we have theories disregarding the biblical chronology. These free themselves from religious constraints necessitated by adherence to the Bible story. A transitional figure is the British geologist and priest Adam Sedgwick (1785–1873). He first supported the theory of worldwide floods but abandoned it in 1831 shortly after an influential book, The Principles of Geology, appeared. Sedgwick’s study of rock strata led to his proposal of the Cambrian and Devonian periods as names for the geological time scale. According to present-day knowledge, these periods date back approximately to 500 and 400 million years. Sedgwick was Darwin’s tutor at Cambridge but strongly opposed Darwin’s theory of evolution. Although the two men remained on friendly terms, Sedgwick continued to believe in divine creation but over long periods of time.

Let us look at two of the proponents of an indefinite antiquity of the world and the consequences for evolution.

Theories of the Earth which Break the Time Barrier

The first to mention here is the Scottish geologist James Hutton (1726–1797), who published his Theory of the Earth in 1795. Hutton’s Theory marks the conventional discovery of deep time. The other one is Charles Lyell, (1797–1885), also a Scottish geologist, who published his major work The Principles of Geology in several volumes from 1830 to 1833. Lyell’s work builds on Hutton’s theory, but there were differences between them: Lyell had more geological facts at his disposal and he felt no need to emphasize that geological changes were evidence of Providence (i.e., the Creator’s wisdom and foresight). Toward the end of his life Lyell came close to accepting Darwin’s evolutionary theory.

What unites Hutton and Lyell is their method: uniformitarianism. The meaning of this method can be gleaned from the full title of Lyell’s work: The Principles of Geology: Being an Attempt to Explain the Former Changes of the Earth’s Surface by Reference to Causes Now in Operation. Lyell’s main thesis was

that all former changes of the organic and inorganic creation are referrible to one uninterrupted succession of physical events, governed by the laws now in operation.[6]

Hence there are uniformities (laws) in nature by which the contemporary features of the planets can be explained.  All features of the Earth are due to physical, biological, and chemical processes, which act in the same way throughout the ages. The uniformities are the most impressive evidence for time’s vastness. There are no dramatic events, like global catastrophes, no miraculous interventions, like the Flood, which would account for the known phenomena. These events would remain unexplained were it not for the operation of the known physical laws. And for the laws of physics to bring about the present face of the Earth, the time span for their operation had to be vast. Therefore, Hutton concluded that

Time is to nature endless …The result of our present enquiry is, that we find no vestige of a beginning,—no prospect of an end.[7]

Hutton refused to speculate on origins and confined geologists to Earth dynamics.[8]Thus the uniform processes in nature require a vast amount of time. The vastly extended time scale not only explains the physical features of the Earth but the evolution of the universe, as the German philosopher Immanuel Kant (1724–1804) speculated in “Idea for a Universal History from a Cosmopolitan Point of View” (1755). Kant’s treatise was the first systematic attempt to give an evolutionary account of cosmic history. Kant’s cosmology openly flouted the chronology of the Bible, as he took his fundamental data from dynamics and astronomy.

Kant agrees with Hutton that  “time is to nature endless.” And he appeals, like Hutton and Lyell, to mechanical laws to drive the evolution of the universe. But Lyell was not concerned with the cosmos, like Kant. He relied on physical principles to explain geological changes observant on Earth. There are four distinct meanings of “uniformity” in Lyell’s The Principles of Geology:

The discovery of deep time had a significant impact on Darwin’s theory of evolution. It eventually granted Darwin’s theory the vastness of time that his postulation of the slow and gradual evolution of life required. The middle of the nineteenth century also saw a grounding of the arrow of time, that is, the unidirectional past-to-future direction of time, in the physical sciences (statistical mechanics and thermodynamics).

Gillispie, Charles Coulston. Genesis and Geology: The Impact of Scientific Discoveries upon Religious Beliefs in the Decades Before Darwin. New York: Harper & Row, 1959.

[6]. Quoted in Charles Coulston Gillipsie, Genesis and Geology: The Impact of Scientific Discoveries upon Religious Beliefs in the Decades Before Darwin (New York: Harper & Row, 1959), 126.

History of Applied Science & Technology by Friedel Weinert is licensed under a Creative Commons Attribution 4.0 International License, except where otherwise noted.