Advanced techniques in irrigation became distinct to the region of Sumer. The Tigris and Euphrates Rivers provided an adequate water source for societies to thrive, but the region’s topographical features also posed issues. During the warmer season, when the region experienced low rainfall levels, the ice which formed in the upper region of Anatolia began to melt, causing water levels to rise. By the time the water flowed down into the Sumer region, large amounts of silt had accumulated within the flat and poorly drained riverbed of Kish, Lagash, Ur, Umma, and Uruk. Furthermore, the issue was exacerbated by the Euphrates River, which was at a higher elevation than the Tigris and often overflowed into the settlements on the Tigris side of the territory. During the early history of Sumer, these regional conditions led to issues with over salination, silt, flood, and drought among the city-states.[1] 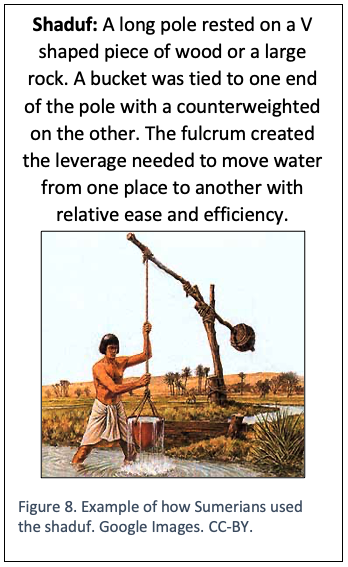 Despite these challenges, irrigation techniques unique to the Sumer region were responsible for the formation of the city-state and urban development. The first few settlements of Kish, Lagash, Ur, Umma, and Uruk established a foothold along the two rivers and benefited from a single irrigation system that supplied their settlements with adequate water flow. However, it was not a perfect scenario because in late winter and spring the glaciers and icecaps from the Taurus, Caucasus, and Zagros Mountains flooded the two rivers with devastating amounts of silt, sediment, and debris, causing the river patterns to change from year to year. Additionally, when the rivers were receding, the region experienced extreme droughts that eroded the nutrients in the soil and produced a hard clay that was not conducive to agriculture.[2] Responding to the need for a predictable water source that these conditions created, the settlements developed artificial irritation techniques. Overtime, subsequent settlements developed along riverbeds, and these also employed single-use irrigation systems by hoisting water in buckets over levees and canals.

History of Applied Science & Technology by Stephanie Guerin-Yodice is licensed under a Creative Commons Attribution 4.0 International License, except where otherwise noted.