Steam powered the Industrial Revolution, and the steam was created by burning coal. Major technological improvements during the eighteenth century allowed miners to meet the rising demands for coal that an increasingly industrialized Britain required. Coal provided fuel for steam engines that powered factory equipment and, later, the railroads and steamships. Coal also provided fuel for blast furnaces that enabled the production of large quantities of iron and steel.[1]

Coal had been used in southern Wales since the Bronze Age for cremation, but the Welsh seem to have been few other uses for the shiny black rock.[3] When the Romans arrived in Britain in the first century CE they used coal for fuel, but it was especially prized because it could be carved and polished to make jewelry, later known as “jet.”[4]

Initially, most coal used was gathered from the Earth’s surface, but it did not burn as well as coal dug from the ground. Early mines were very basic: the miners dug shafts straight down until they reached a layer of coal and then dug horizontal tunnels along the coal seam. The mined coal was hauled up out the shaft in baskets. Over time, the mines became more complex and were dug deeper. Unfortunately, deep mines tended to flood. Mines located on high ground could be kept dry by drainage tunnels, but as mines grew in size and depth the drainage tunnels could not keep up with the influx of groundwater.[5] Another way of removing water was needed.

In 1698, the English inventor Thomas Savery (1650–1715) patented a steam-powered pump to lift water out of the mines, but his pump was limited to raising the water 80 feet. Additionally, because the pump was located inside the mine, there were concerns that it increased the likelihood of fires.[6] The French physicist and inventor Denis Papin (1647–1713) designed an “atmospheric engine” that used a vacuum created by the condensation of steam to drive a piston.[7] Thomas Newcomen (1664–1729) improved on the designs of Savery and Papin, using a steam-powered piston to move an overhead rocker beam that, in turn, moved a rod in a vacuum pump. Newcomen’s pump was first used at a colliery in 1712 and by the 1760s his Newcomen atmospheric engines were in widespread use throughout England and Scotland.[8]

Although coal was not in common use in Britain until the early thirteenth century, early on it was recognized as a dirty fuel source.[9] In 1285, commissions were set up in London to deal with the issue of coal smoke and its effects on the city’s air quality.[10] Coal contains sulfur, which is released into the air when it is burned. The sulfur combines with hydrogen and oxygen to create pollutants.[11] So much coal was being burned that in 1306 there was a sort of “general revolt” that led to a ban on coal burning and fines for offenders.[12] These efforts to restrict the use of coal were short-lived; there was a need for coal as fuel, not only for home fires, but for the merchants and smiths who relied on it for their livelihoods.[13]

Coal smoke and air pollution would continue to be an issue in the ensuing decades: in 1586, Queen Elizabeth I was reportedly annoyed by coal-fueled beer brewing. In January 1637, under the reign of King Charles I, the brewers in Westminster were prohibited from using coal to make their beer.[14] Under Charles I’s rule, the “most sustained and serious attack on urban air pollution of the entire early modern period” took place. The push for clean air was politically motivated and was part of a larger movement intended to create an orderly court and capital.[15]

Charcoal, a fuel created by burning wood, was used as a primary fuel before coal became popular. However, it required a lot of trees to make charcoal and as the population of Britain increased, more trees were being burned than could be regrown in a reasonable amount of time.[16] So much timber was used to create charcoal, which in turn was used to power blast furnaces for iron production, that by the 1600s there was a nationwide wood shortage.[17]

As Britain’s trees disappeared, laws were passed to limit the amount of wood that people could take from the forests. And as supply dwindled, the price of wood skyrocketed; accordingly, people began to turn to other fuel for heat. By the 1570s the use of domestic coal had risen dramatically and by the end of the reign of Queen Elizabeth I in 1603 it was the primary fuel in Britain.[18] By 1700, the northeastern coalmines were providing tons of coal for London and the rich coalfields around Newcastle were the most prolific sources of coal.[19]

At the turn of the eighteenth century, despite the diminishing supplies of charcoal, it was still being used as the fuel of choice for iron production. But ironmaking required an immense amount of charcoal to power blast furnaces, and with the cost of charcoal increasing, the iron manufacturers needed a more dependable and economically viable fuel source. Coal was abundant by this time, but unfortunately it was not suitable for smelting iron because the coal contained too much sulfur, which weakened the iron and made it friable (likely to crumble).[20]

One way to avoid this problem with iron was to cook the coal in a manner similar to the production of charcoal in order to remove the sulfur and silicon it contained. Cooking the coal produced coke, which is a nearly pure form of carbon.[21] Around 1709, Abraham Darby (1677–1717) successfully used coke to smelt iron at Coalbrookdale Furnace.[22] Darby’s process became profitable in 1713 and by the 1750s it became the standard way of producing iron. The iron industry relocated from remote areas to sites close to coalfields.[23]

Impurities remained a problem for ironmakers until Henry Cort (1740–1800) patented a method known as “puddling” in 1783.[24] In this method, the iron was taken from the furnace and shaped into bars by passing it through rollers, which produced a form of wrought iron that was less brittle than previous types of iron. By the late eighteenth century high-quality iron was available at reasonable prices, making it an attractive building material. Britain’s iron industry went from producing 12,000 tons of iron in 1700 to 400,000 tons of iron in 1820.[25] 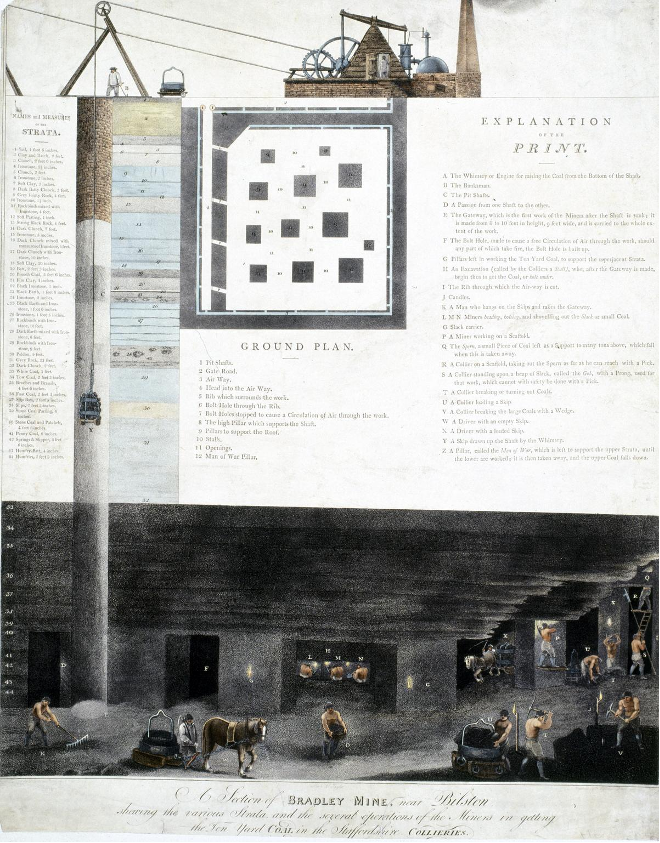 Figure 1. Print showing a section of Bradley Mine, near Bilston in the West Midlands. Francis Eginton, 1808. The print shows the rock strata and a floor plan of the mine, as well as depicting miners busy at various tasks. A pit pony (lower left) is being used to haul coal out of the mine. Openly available as part of an OpenArtstor collection; Creative Commons Attribution-NonCommercial-ShareAlike, https://www.jstor.org/stable/10.2307/community.26433661.

Coal mining was dirty and dangerous work. The eighteenth-century miners had to contend with doing heavy physical labor in cramped quarters with very little light and no fresh air (fig. 1). Breathing coal dust resulted in lung diseases such as “black lung,” and tunnels could collapse and were susceptible to flooding. Perhaps the most insidious problem was the poisonous gases that existed in the mines; these could reduce the amount of oxygen to such low levels that the miners could be instantly asphyxiated.[26]

Three deadly gases were “choke damp,” which is mostly carbon dioxide; “white damp,” or carbon monoxide; and “fire damp,” or methane. Carbon dioxide and carbon monoxide would cause suffocation, but methane would build up along the ceilings of the mines where it could be set alight by a miner’s candle. If large concentrations of fire damp were ignited, it could result in a tremendous explosion.[27]

Two inventors strove to develop a source of light for miners that would not cause fires. The British engineer George Stephenson (1781–1848) and Cornish chemist and inventor Humphrey Davy (1778–1829) independently developed safety lamps that enveloped the lamp’s flame inside of a wire mesh or screen that prevented the flame from causing an explosion (fig. 2).[28] One benefit of using the lamps was that it allowed miners to work coal seams that had previously been considered too risky to mine.[29] 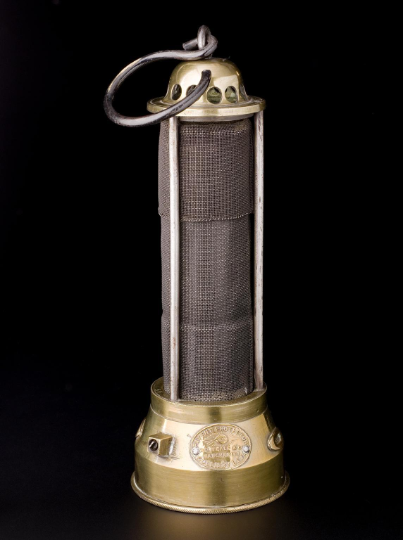 Mine ventilation was increased by adding a second shaft to the mine. By lighting a fire at the top of one of the shafts, air was drawn through the mine from the other shaft. Trapdoors were installed in the tunnels to help guide the flow of air. These doors were operated by children known as trappers, and they had to sit in total darkness for twelve-hours shifts to open and close the trap doors.[30]

Mines also employed children and women, both above ground at the mine site and below ground in the tunnels (fig. 3). On the surface, the women sorted the coal by size, while the children picked out lumps of valuable coal from the worthless rocks. Women and children hauled coal out of the mines, and the children, mostly boys, drove the pit ponies to the pit bottom.[31] 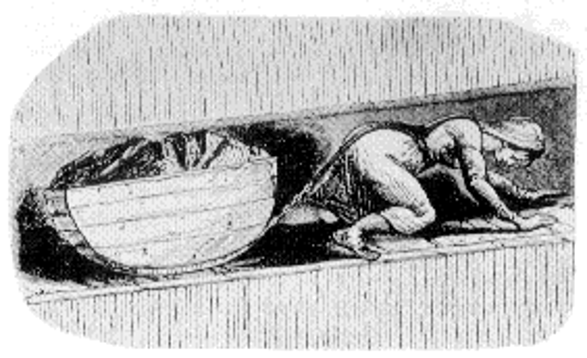 Figure 3. A woman working as a hurrier or coal drawer, pulling a filled coal tub up out of the mine. Image in public domain; originally published in the Children’s Employment Commission (Mines) report of 1842.

Miners had few recourses for protection, as trade unions were illegal in Britain from 1800 to 1824.[32] Growing awareness of the employment of women and children in mines led to Parliamentary commissions that investigated workplace accidents, deaths, and other problems in the mines. In 1842, the Mines and Collieries Act was passed, which banned women and girls from working underground and established a minimum age of ten for boys.[33] Other laws that regulated safety and limited working hours were passed, but coal mining remained a dangerous job.

Madureira, Nuno Luis. “The Anxiety of Abundance: William Stanley Jevons and Coal Scarcity in the Nineteenth Century.” Environment and History 18, no. 3 (August 2012): 395–421.

Rosen, William. The Most Powerful Idea in the World: A Story of Steam, Industry, and Invention. New York: Random House, 2010.

History of Applied Science & Technology by Karen Garvin is licensed under a Creative Commons Attribution 4.0 International License, except where otherwise noted.