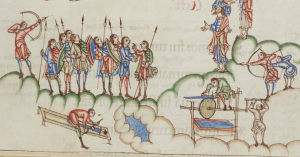 This is an illustration from an Anglo-Saxon copy of the Utrecht Psalter, an illustrated book of Psalms, probably originally from Francia and dating to the ninth century (the details are easier to see in the color copy than the line drawn original).  The illustration depicts Psalm 64: on the right the psalmist stands under the Lord amid the forces of righteousness; on the left is the army of darkness.  As Lynn White first pointed out, the interesting thing is that while the iniquitous are sharpening their swords the traditional way, using a whetstone, the righteous have invested in the very latest technology.  In fact, this is the first known illustration of a rotary grindstone, being turned, what is more, by that most useful of inventions, the hand crank.  This illustration is particularly useful to historians because it demonstrates that contrary to what you may sometimes hear, the medieval Church was perfectly capable of aligning virtue with technological progress.

2. Roger Bacon: “On the Hidden Workings of Nature and Art and the Emptiness of Magic.” This is an extract from a long letter that Bacon wrote to William of Paris, who seems to have asked him to discuss the possibility of doing marvelous things through magic.  Bacon responded that magic was empty and evil, but that one could do truly wonderful things through technology.

“I will now enumerate the marvelous results of art and nature which will make all kinds of magic appear trivial and unworthy. Instruments for navigation can be made which will do away with the necessity of rowers, so that great vessels, both in rivers and on the sea, shall be borne about with only a single man to guide them and with greater speed than if they were full of men. And carriages can be constructed to move without animals to draw them, and with incredible velocity. Machines for flying can be made in which a man sits and turns an ingenious device by which skillfully contrived wings are made to strike the air in the manner of a flying bird. Then arrangements can be devised, compact in themselves, for raising and lowering weights indefinitely great. . . . Bridges can be constructed ingeniously so as to span rivers without any supports.”  (From James Harvey Robinson, Readings in European History, vol. 1 (Boston: Ginn and Company, 1904), 461)

3. Jacques de Vitry, “Description of University Students.”  Jacques de Vitry (d. 1240) was a French bishop who traveled widely before settling down and attending to his very successful ecclesiastical career.  Among his many works of history he included this not-very-flattering description of the students at the University of Paris.

“Almost all the students at Paris, foreigners and natives, did absolutely nothing except learn or hear something new. Some studied merely to acquire knowledge, which is curiosity; others to acquire fame, which is vanity; still others for the sake of gain, which is cupidity and the vice of simony. Very few studied for their own edification or that of others. They wrangled and disputed not merely about the various factions and subjects of discussions; but the differences between the countries also caused dissensions, hatreds and virulent animosities among them, and they impudently uttered all kinds of affronts and insults against one another.  They affirmed that the English were drunkards and had tails ; that the sons of France were proud, effeminate and carefully adorned like women. They said that the Germans were furious and obscene at their feasts ; the Normans, vain and boastful ; the Poitevins, traitors and always adventurers. The Burgundians they considered vulgar and stupid. The Bretons were reported to be fickle and changeable and were often reproached for the death of Arthur. The Lombards were called avaricious, wicked and cowardly; the Romans, seditious, turbulent and slanderous ; the Sicilians, tyrannical, brigands and ravishers ; the Flemings, fickle, prodigal, gluttonous, yielding as butter, and slothful. After such insults as these in words they often came to blows…” (From James Harvey Robinson, Readings in European History, vol. 1 (Boston: Ginn and Company, 1904), 455-54.)

History of Applied Science & Technology by Hans Peter Broedel is licensed under a Creative Commons Attribution 4.0 International License, except where otherwise noted.