Chapter 1 – A Case Study: The Tale of Two City-States 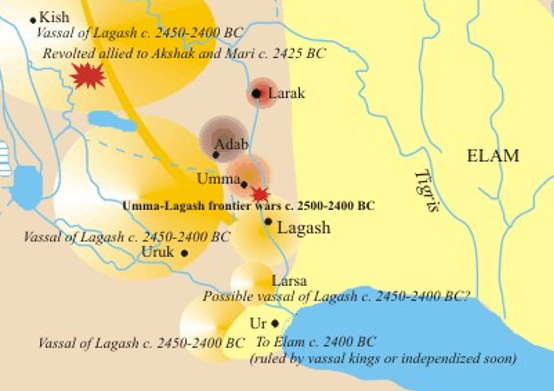 There is evidence that the first conflict over waterways occurred in 2500 BCE between the rulers of Lagash and Umma. Lagash was one of the original established agricultural communities along the Tigris River. Over time, the kings of Lagash (circa 2500–2270 BCE) expanded beyond the walls of the city-state to eventually conquer most of the Sumer region. It was customary for Sumerian kings of the First Dynasty to reduce conquered city-states to tributary states. In this system, authority was primarily decentralized and the rulers within Lagash’s vassal territory maintained substantial autonomy. When the king of Umma, a city-state approximately 35 miles north of Lagash, threatened Lagash’s land and water resources, a series of reappropriations were made in an attempt to settle the border dispute. [1] Epigraphic scientists have translated multiple inscriptions outlining Umma’s transgressions, the interstate conflict with Lagash, and the course of action the kings of Lagash took to reclaim their lands.

The primary source titled Inscription from Umma and Lagash (See Doing History) demonstrates the importance placed on access to waterways: land and canal maintenance was paramount to the success and failure of early city-states. Essentially, without access to water the people of Sumeria could not sustain their agricultural base and the survival of the community was at risk. Furthermore, as the region attracted more settlers along the riverbeds, the agricultural communities grew in population. Because of the severe flood and drought seasons, however, the shared water source either experienced over salination and silt and/or flooded the agricultural plains. The conflict would have occurred because communities at the lower end of the rivers would have had to deal with oversalination and silt buildup from the irrigation systems of communities at the upper end of the rivers, a lower water supply, or the devastating consequences of flood waters that increased in volume and debris. These issues propelled humans to solve issues surrounding the use of river water and irrigation techniques.

History of Applied Science & Technology by Stephanie Guerin-Yodice is licensed under a Creative Commons Attribution 4.0 International License, except where otherwise noted.