Metallurgy is the science of separating metals from their ores, and it developed quite recently, considering the length of human history. Ancient Egyptians were neither the inventors of metallurgy, nor the most innovative in its development.[1] Yet metals, especially gold, had a very important place in their culture, and they produced some of the best-known ancient metal objects from that metal, such as the golden mask of King Tutankhamun. From the point of view of historians and archaeologists, Egypt’s importance lies in the incredible detail in which the evidence of the past was preserved in the arid climate of ancient Egypt. What was destroyed elsewhere was, in Egypt, preserved or recorded in its art.

Ancient Egypt fascinates both the general public and scholars. The study of ancient Egyptian metallurgy is a developing field, but although hundreds of analyses of the chemical composition and technology of ancient Egyptian metal objects have been done, there is no synthesis of the knowledge amassed so far.[2] The evidence available to modern archaeologists is largely determined by preselection by the past culture—in this case ancient Egyptians—by conscious and unconscious rules that were applied to the creation and production of sources. For ancient Egypt, we have data that show how much evidence is present and how other pieces of evidence are missing from the sources.

The main metals used in ancient Egypt were copper, gold, silver, and iron. Copper and gold were more abundant, while silver was relatively rare, and iron emerged very late in Egyptian history (only in the first millennium BCE, although meteoritic iron was already in use as early as the fourth millennium BCE).[3] Sources of the copper ore were found in the Egyptian Eastern Desert and Sinai, and were exploited by mining and military expeditions, as this was not the core territory of ancient Egyptians. Co-occurrence of gold and copper ore, found in quartz veins that contained both metals, was the decisive factor in the earliest explorations. Ancient Egyptian prospectors were very successful in reading the natural characteristics of rocks and discovering new sources of ore. There is hardly any modern site with ore near the surface that was not already known in antiquity. Gold was mined from the quartz veins, and ore had to be crushed. In the case of copper, Egyptians knew how to extract copper from the oxide and sulphide ores, repeatedly smelting the ore to get ever purer metal. Sources of iron ore were not very rich in Egypt, but those in Nubia, further to the south, were richer.[4] Egyptians relied on broad exchange networks, reaching both south, north, and northeast of Egypt, although these trade connections were harmed when competing neighboring states stopped the influx of the materials. More scientific analyses are needed to reconstruct these exchange networks and study their changes through time.

Metal objects have been used for the greater part of Egyptian history by the elite and for the elite. The occurrence of metals in Egypt is rather late compared to other Eastern Mediterranean cultures. Small copper objects appeared for the first time in the Badarian culture, in Upper Egypt, during the second half of the fourth millennium BCE. A wider application of copper objects can be found about five hundred years later, with the appearance of copper tools for craftsmen, copper and gold jewellery, and metal vessels. Later items included cosmetic objects, such as mirrors, razors, and tweezers. Many popular works state that early Egyptians, including the Old Kingdom and Middle Kingdom pyramid builders, used only tools made of pure copper, but that is not true: they were using arsenic copper as the main practical alloy, which was typical for the whole ancient Near East in the Early Bronze Age. Sometimes arsenic and copper occur naturally together in one ore but in other cases they were mixed intentionally. The addition of arsenic to copper causes the resulting alloy to be harder and gives it properties similar to those of tin bronze, such as  hardness and ductility.[5] And already in the Early Dynastic Period, Egyptians certainly used tin bronze (an alloy of copper with c. 10% tin). Archaeologists know this because the oldest definitively dated tin bronze objects, a spouted jar and wash basin, were found in the tomb of King Khasekhemwy, which was built and furnished at the end of the Second Dynasty (c. 2775–2650 BCE).

Old Kingdom (Fourth to Sixth Dynasties, c. 2600–2180 BCE) evidence from the era of the pyramid builders shows in great detail how that culture decided what they would preserve and how. Had it not been for the custom of depositing copper model tools in the burial equipment, we would have almost nothing preserved from the metal tools used in that era because full-sized tools were recycled, both in that period and later. Iconographic sources indicate the use of other metal artifacts that were not preserved from the Old Kingdom, such as metal weapons. Scattered finds from Old Kingdom settlements provide artifacts which were not included in the burial equipment (or only very rarely), nor included in the iconography, such as sewing needles.[6]

Ancient Egyptians were rather conservative in their recourse to technological solutions. They used V-shaped wooden hafts and used leather thongs to attach metal blades to tools (fig. 1) even though they knew about the more practical technological solution of the socket eye for tool and weapon blades (fig. 2). 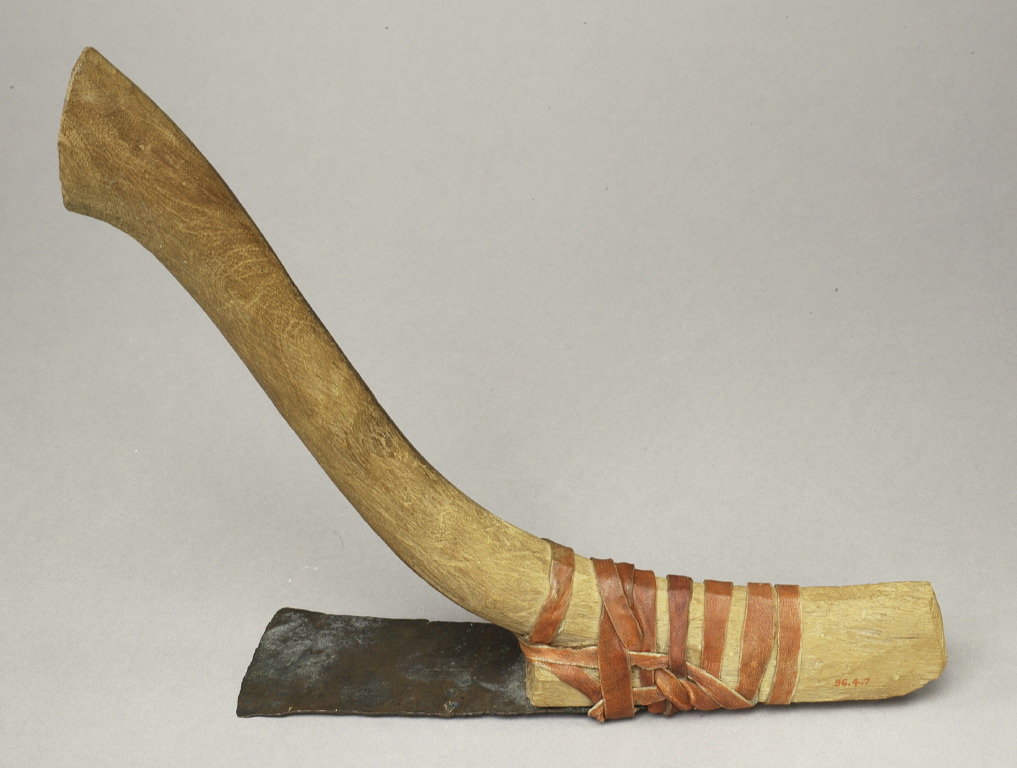 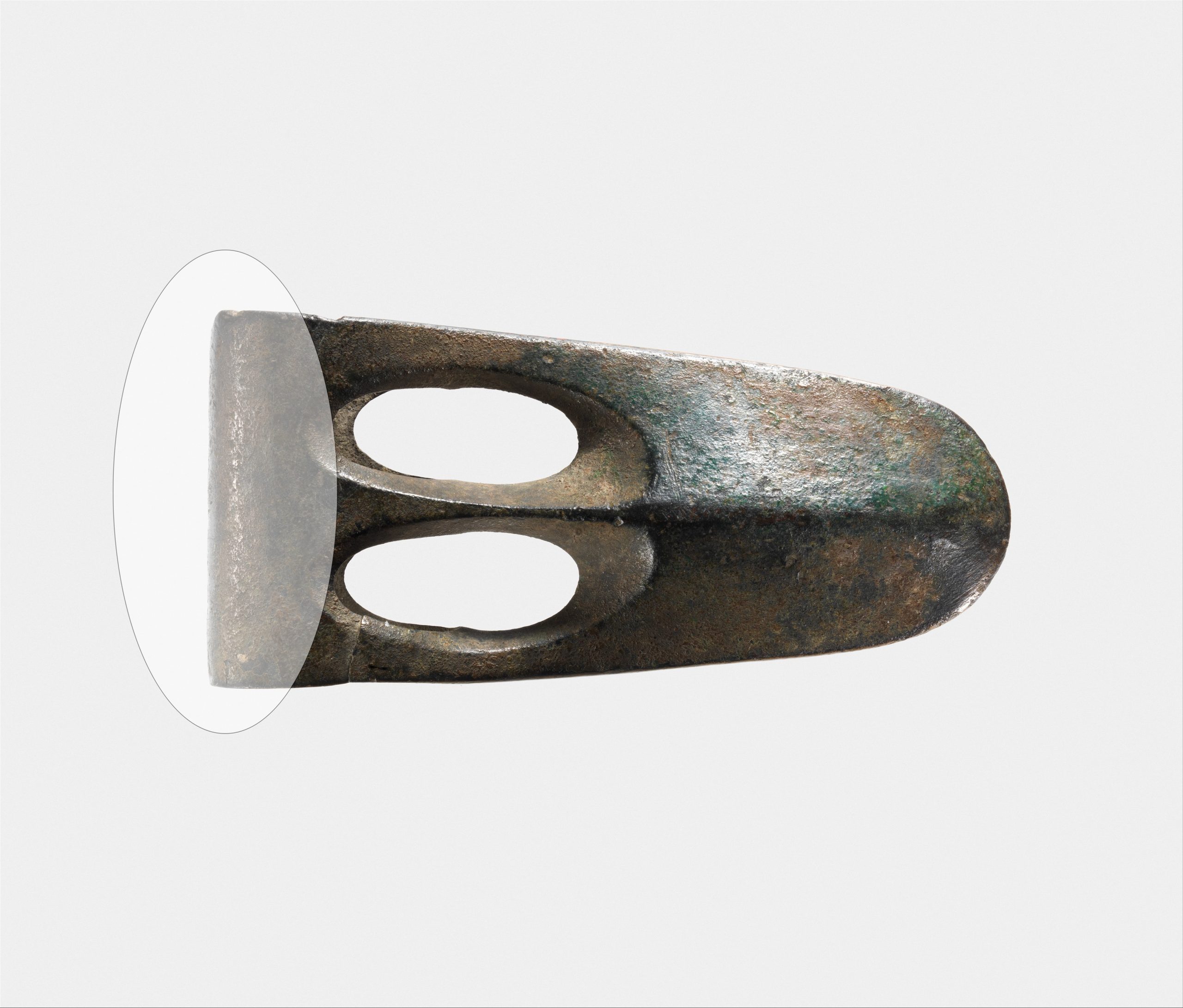 Scholars know that Egyptians were aware of such technology because they depicted captured foreign soldiers with weapons of a different construction. Later, in the Second Intermediate Period (sixteenth to fifteenth century BCE), part of north Egypt was ruled by foreigners, called Hyksos, who used socket eyes on their axe blades.

Ancient Egyptians accepted innovative approaches, but only when necessary. The technology of their tools and weapons did not change much, and they held to their traditional solutions, which worked well enough. Full-size tools and model tools used similar concepts (figs. 3 and 4). 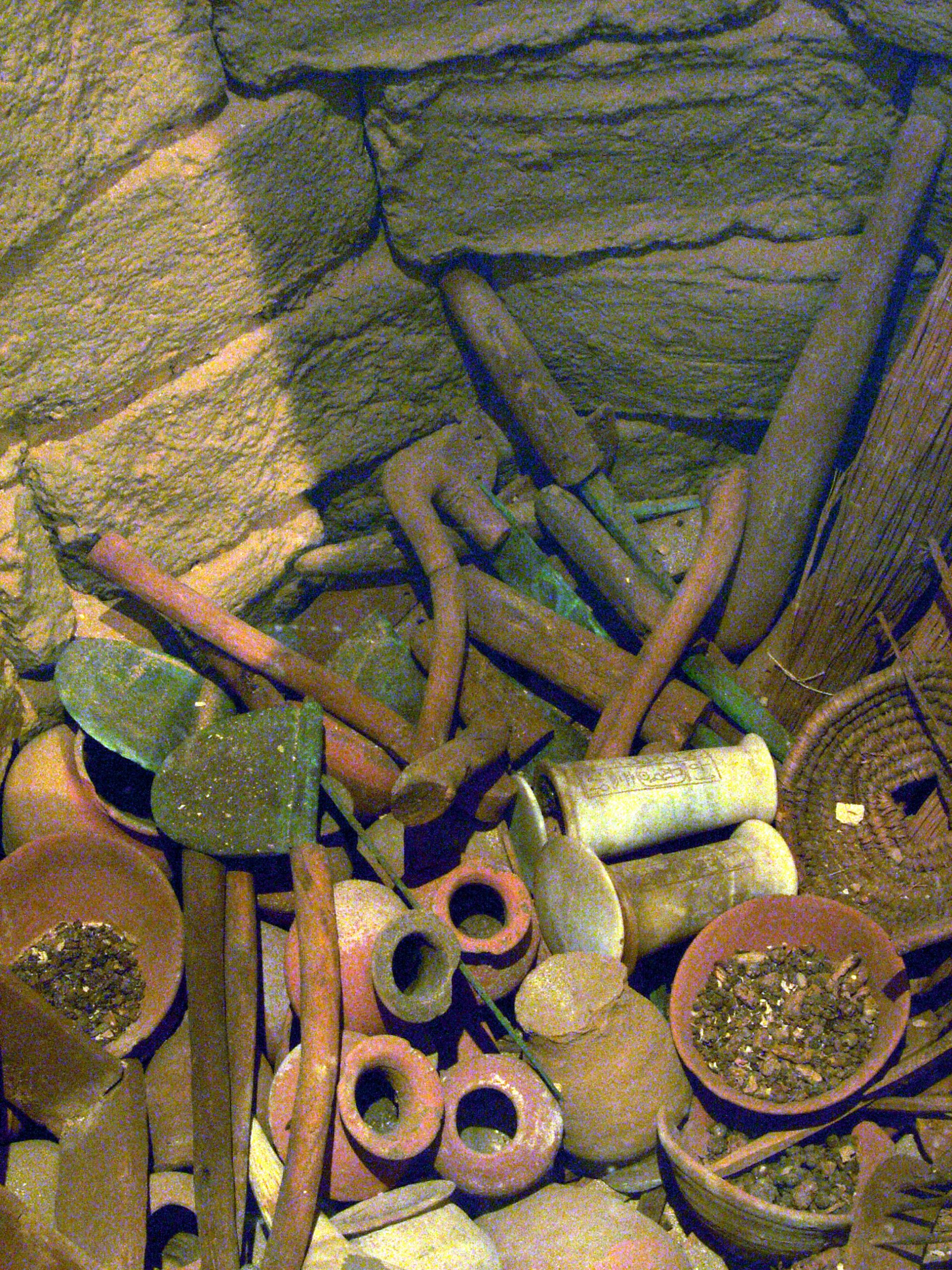 But Egyptians did adopt new types of weapons, such as swords and horse-drawn chariots, when it became inevitable that they would have to fight the foreign Hyksos troops.[7] Also, they adopted tin bronze very slowly. There are sites where tin bronze objects were used along with those made of arsenical copper.[8] Only from the New Kingdom and its Eighteenth Dynasty (fourteenth century BCE) do we have definitive evidence of the use of tin bronze on a large scale.[9]

Most Egyptians worked in agriculture and used stone-flint sickle blades (fig. 5) and other tools made from stone, wood, and bone. 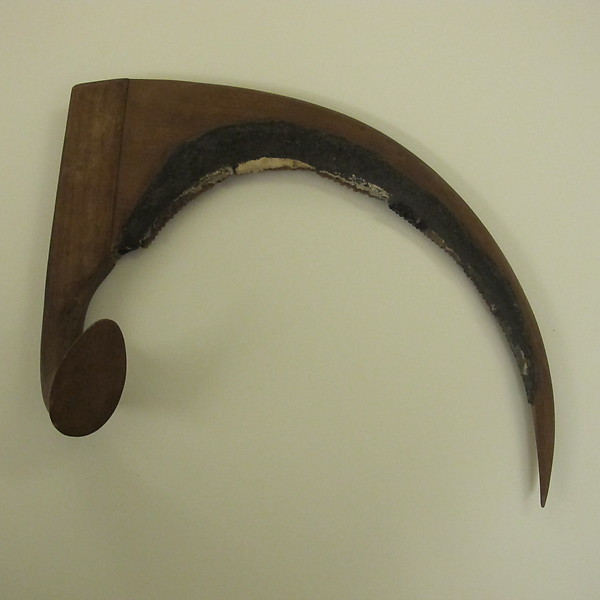 The iron agricultural tools were used on a larger scale only since the Ptolemaic Period, when a foreign Macedonian dynasty ruled over Egypt and iron was more accessible, because in nature iron ores are more widespread than ores of other metals. Only then was there a mass dissemination of metal objects in Egypt, tin bronze still being used for cast objects. Later, in Roman Egypt, this division continued, with iron tools and weapons being used massively, while bronze and brass (the latter being an alloy of copper and zinc) was used for a wide range of cast objects. It is interesting to note that both Greek and Roman authors had no doubts attributing the building of the pyramids to Egyptians, which by that time were already ancient. Wild theories, disregarding our knowledge of the ancient Egyptian technology, including metallurgy, are of much later date.

The question of cultural conservativism, apparent in the case of ancient Egypt, is characteristic for many human societies: if the solution works for the society, there is no pressing need to change it. This can be observed in the case of electric cars versus gasoline-powered cars, and more generally in the use of fossil fuels versus renewable energy sources. The school of thought researching the “success” of technologies in societies is called SCOT—social construction of technology.[10]

It was true in the past that many ancient Egyptian treasures were accessible only in Egypt or in world museums. However, in the last decade a number of credible online resources allow access to hundreds of ancient Egyptian objects just by entering the word “Egypt” in a collection search, including the oldest working Egyptological website, courtesy of the Fitzwilliam Museum; the online collections of the Metropolitan Museum of Art in New York; the Museum of Fine Arts in Boston; the British Museum in London; and the Petrie Museum of Egyptian Archaeology, University College, London.

Complete documentation for excavating the famous tomb of Tutankhamun is also online at the Griffith Institute of the University of Oxford. However, online and open-access resources about ancient Egyptian metallurgy are rather scarce, and there is also misleading information in popular works. One important and credible online resource is a lavishly illustrated catalog, “Gifts for the Gods: Images from Egyptian Temples,” on ancient Egyptian metal statues.[11]

[9]. Some analyses of Eighteenth Dynasty Amarna objects have been published in Zofia Stos-Gale, Noel Gale, and Judy Houghton,“The Origins of Egyptian Copper: Lead-Isotope Analysis of Metals from El-Amarna,” in Egypt, the Aegean and the Levant: Interconnections in the Second Millenium BC, ed. W. Vivian Davies and Louise Schofield (London: British Museum, 1995), pp. 127–35.

Ancient Egyptian Metallurgy by Martin Odler is licensed under a Creative Commons Attribution 4.0 International License, except where otherwise noted.