The Greeks and Chinese mentioned the phenomenon of magnetism as early as the sixth century BCE and fourth century BCE, respectively, when they noticed that certain types of rocks would attract small pieces of iron.[1] These rocks, known as magnetite, are a form of iron oxide and are very common.[2] Although the ancients made many attempts to explain how magnetism worked, its fundamental nature would remain a mystery until the nineteenth century.

Pliny the Elder (23–79 CE) described magnetite deposits in Spain and also noted that Ethiopia was a good source for magnets.[3] Large numbers of magnets were imported from India; however, few practical uses for magnets existed at the time. While some medical uses were mentioned in one of the Hippocratic treatises, and the stone was reported to have magical power, the main use of magnets seems to have been for their entertainment value.[4]

Magnets were commonly known as lodestones because of their ability to point in a specific direction. The word “lodestone” was coined around 1515, and is a combination of the Old English words “lād” (meaning direction or course) and “stān” (stone).[5] During the first century CE, the Chinese used a compass that incorporated a lodestone as a feng shui (Chinese geomancy) divining instrument to determine the best orientation for building sites. This device consisted of a bronze or wooden plate on top of which sat a spoon-shaped lodestone that could move freely to indicate direction (fig. 1).[6] The compass, or zhi nan zhen, was orientated with south as the primary direction.[7] 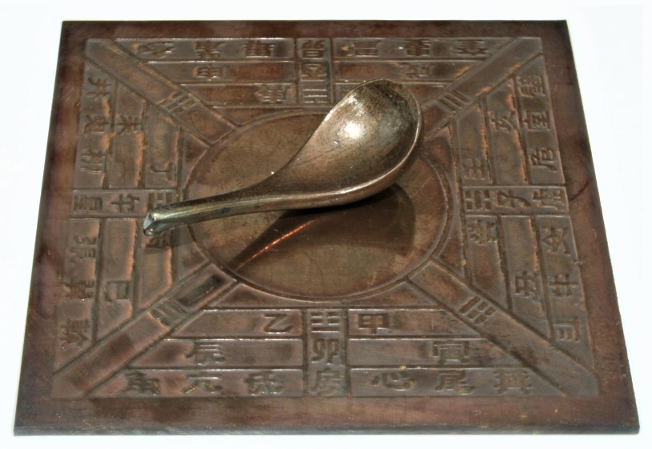 Sometime around the twelfth century the Chinese developed a type of compass that used a magnetized needle floating in water.[8] Eventually the water was dispensed with, and a magnetized needle was pinned to a board that had an intricate design marked for feng shui purposes.[9] While this type of compass would later prove to be immensely useful to the Europeans for seafaring navigation, the Chinese continued to use a magnetized needle floating in water for navigation purposes until at least the sixteenth century.[10] When the compass arrived in Europe is uncertain; one theory suggests that the Venetian explorer Marco Polo (1254–1324) took it from China to Europe,  while another theory suggests that Arab traders may have introduced it. Alternatively, the compass might have been independently developed in Europe.[11]

Magnets were attributed with a wide range of magical and curative properties. No one had attempted to actually prove these claims until physician and philosopher William Gilbert (1544–1603) of England began to conduct formal experiments with magnets and electricity. In 1600, Gilbert published On the Magnet and Magnetic Bodies, and on That Great Magnet the Earth, commonly referred to as De Magnete, in which he described his experiments and encouraged others to recreate his work.[12] The book is described as being the first textbook on magnetism.[13] Gilbert was the first to recognize that the Earth is a magnet, but despite his experimentation he was unable to offer a complete explanation of magnetism; he also believed that electricity and magnetism were separate phenomena.[14]

Others tried to explain the natures of magnetism and electricity, including the French philosopher René Descartes (1596–1650), the Italian physician and physicist Luigi Galvani (1737–1798), the Italian physicist and chemist Alessandro Volta (1745–1827), and the American philosopher and statesman Benjamin Franklin (1706–1790).[15] During the eighteenth century, the French physicist Charles-Augustin de Coulomb (1736–1806) built a torsion balance to measure the force between a magnet’s north and south poles. He also set about describing the magnetic force in mathematical terms: this became his inverse-square law, which said that the strength of a magnetic field or electrical field dropped off the farther it was from an object: for example, at twice the distance, a magnetic field was a quarter of its strength, and at three times the distance, the same magnetic field would be only one-ninth as strong.[16]  The inverse-square law, which later became known as Coulomb’s Law, contributed to the idea that that there was a link between magnetism and electricity.[17]

The impact that Oersted’s discovery would have on technology was tremendous. Magnetic fields had previously only been seen with permanent magnets and lodestones, but Oersted’s work showed that a magnetic field could be created by using an electrical current—and that meant that it could be controlled.[20]

André Marie Ampère (1775–1836), a French physicist, heard about Oersted’s discovery and set about trying to understand the physics underlying the phenomena. Seeing that an electrical current could induce a magnetic field, Ampère wondered if the reverse was true: Would wires carrying an electrical current generate a magnetic field? He designed an experiment to test whether a pair of electrified wires would behave like magnets and attract or repel one another; Ampère was successfully able to demonstrate a noticeable, but weak, force between the two wires.[21] Ampère carried out many experiments and published his results in his Memoir on the Mathematical Theory of Electrodynamic Phenomena, Uniquely Deduced from Experience, in 1827.[22]

In 1825, the English scientist William Sturgeon (1783–1850) produced the first practical electromagnet, which consisted of a seven-ounce curved iron bar wrapped with bare copper wire and varnished to prevent it from shorting out (fig. 2). The electromagnet was able to lift nine pounds but was too short-lived and weak for practical use. [23]

Other scientists soon began experimenting with electromagnets, including the Dutch researcher Gerard Moll (1785–1838) and the American scientist Joseph Henry (1797–1878) (fig. 3). Moll built larger electromagnets than Sturgeon, but his versions required large batteries that made the magnets cumbersome, whereas Henry focused on using small batteries to power his creations. The small power source would make Henry’s electromagnets versatile, and they were instrumental in the development of the first electric doorbell, created by Henry in 1831.[24] In 1835, Henry created an electromechanical relay, which was an electrical switch that used an electromagnet to open and close contacts in a circuit. By mid-century, Henry’s relays were being used in telegraph systems and telephones.[25] 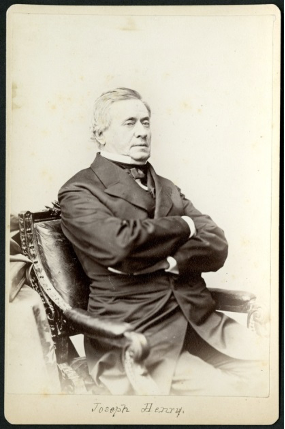 Henry also improved the design of the electromagnet by insulating the wires with silk cloth so that he could wrap more layers of wire around the magnet without shorting them out.[26] Adding more wraps of wire, or “turns,” produced a stronger magnetic field.[27] Henry’s electromagnets became increasing large, including a twenty-one pound version that could lift 750 pounds and, in 1830, the “Yale Magnet,” an eighty-two and a half pound electromagnet that could lift more than a ton.[28] In 1833, Henry built an even larger magnet: it weighed 100 pounds and could lift a staggering 3,500 pounds of weight (fig. 4).[29]

During the 1820s, the English scientist Michael Faraday (1791–1867) conducted a series of experiments with magnets and current-carrying wires to determine how they interacted.[30] Using a bar magnet, he found that it produced a perpendicular force on a current-carrying wire. He set up an apparatus that consisted of a beaker containing a vertical bar magnet in a pool of mercury. He suspended a wire over the beaker, attached to a pivot, and applied electricity, which caused the wire to move in circles about the magnet. Faraday had created the first electric motor.[31]

During the nineteenth century, the growing body of knowledge surrounding electromagnetic induction led experimenters to create the electrical turbine, which uses rotating magnets to generate an electrical current. The turbine itself can be powered by any source, such as wind, water, or steam, and the ability to generate electrical power on demand soon reshaped the world.[34]

The invention of alternating current (AC) generators and transformers allowed for the development of an electrical power distribution system that was able to provide electrical power over a larger area than direct current (DC) systems, such as the one created in the 1880s by Thomas Alva Edison (1847–1931) at his Menlo Park laboratory in New Jersey. Edison’s DC system used low voltages to provide an electrical current that flowed in one direction; while the voltage he used was relatively safe, Edison’s system suffered from power loss and could only deliver power for about one mile (see chapter 12, “Thomas Alva Edison”).

On the other hand, alternating current systems used high voltages to send power over long distances. With AC, the current changes direction many times a second, alternating first one way, then the other. However, the high voltages used for AC power lines caused them to spark, which posed a danger to people. Edison’s solution at his Pearl Street Power Station was to generate AC current in order to send the electrical power out, but then use step-down transformers at the destination to convert the high-voltage AC power into safer, low-voltage DC power for customers’ use. During the latter part of the nineteenth century, the differences of opinion over whether a DC or AC system was better evolved into a bitter dispute in what was known as the “War of the Currents.”[36] (See chapter 12, “Early Electrification.”)

While electromagnetism was showing itself to be useful in the commercial realm with the creation of numerous electromechanical devices, scientists were perplexed about the fundamental nature of electricity and magnetism, which were still believed to be separate phenomena despite numerous experiments that showed a clear connection between them.[37]

By the 1870s, the Scottish physicist James Clerk Maxwell (1831–1879), a brilliant mathematician, established the mathematical foundations of electromagnetism and was finally able to show that electricity and magnetism were two facets of the same phenomena.[38] In 1865, Maxwell published “A Dynamical Theory of the Electromagnetic Field” in the Philosophical Transactions of the Royal Society, in which he included a complete set of equations describing electricity and magnetism.[39] In 1873, he published Treatise on Electricity and Magnetism, in which he included twenty mathematical equations that described all the known phenomena of magnetism and electricity.[40]

Maxwell’s equations are the basis of understanding complex physical phenomena, including color vision, thermodynamics, and the electromagnetic spectrum, which includes visible light, radio, infrared, and ultraviolet radiation. Building upon Maxwell’s work, modern scientists and engineers have taken their understanding of electromagnetism and used it to create communications systems, radar, the global positioning system, and Wi-Fi (wireless network protocols for local networks and internet access).[41]

Rivers, P. J. “New Lamps for Old: Modern Nautical Terms for Ancient Marine Practices and the Navigation of the Zheng He Voyages.” Journal of the Malaysian Branch of the Royal Asiatic Society 85, no. 1 (June 2012): 85–98.

Standage, Tom. The Victorian Internet: The Remarkable Story of the Telegraph and the Nineteenth Century’s On-line Pioneers. New York: Bloomsbury, 2014.

Stanley, Matthew. “By Design: James Clerk Maxwell and the Evangelical Unification of Science.” British Journal for the History of Science 54, no. 1 (March 2012): 57–73.

[9]. P. J. Rivers, “New Lamps for Old: Modern Nautical Terms for Ancient Marine Practices and the Navigation of the Zheng He Voyages,” Journal of the Malaysian Branch of the Royal Asiatic Society 85, no. 1 (June 2012):  93.

History of Applied Science & Technology by Karen Garvin is licensed under a Creative Commons Attribution 4.0 International License, except where otherwise noted.