Crowdfunding, which barely existed a few years ago, spread to every aspect of society—from funding creative projects, local civic projects to causes and charities, and of course—funding startup companies. Today, crowdfunding is an essential part of every entrepreneurship conversation.

Modern has the following haiku-like definition:[1]

Crowdfunding is one of the great movements of the twenty-first century, and one of the most powerful. Still in its infancy, crowdfunding moved beyond Kickstarter-like passion projects and became a major new and disruptive force in investment funding. And just in the last few years, the crowdfunding movement impelled the U.S. Congress, state legislatures in all 50 states and the Security Exchange Commission to overhaul investment laws that existed since 1934.

Broadly defined, crowdfunding is collecting small amounts of money from a large number of people. With the advent of social networks (abundance of people on the network), crowdfunding only recently became practical. But the concept has been around for centuries—except that with crowdfunding, the people willingly contribute money for a project, product, or cause that they believe in.

The concept of crowdfunding is old. What’s new is applying technology—social networks—to the process. This allows interested supporters from around the globe to support any project, anywhere, as long as they share passion and see merit in the project’s goals.

In the early 1880s, France gave the United States a gift: the Statue of Liberty. It was shipped to New York City where remained packed in crates for over a year. Why? The New York state government would not allocate the $200,000 required to build and mount the statue onto a pedestal (today this would be over $2.5 million). Newspaper mogul Joseph Pulitzer ran a fundraising campaign through his “New York World” tabloid—offering to publish the name of everyone who donated, to the front page. Donors also would get little rewards: $1 got you a 6-inch replica statue and $5 got you a 12-inch statue. The campaign went viral. Within six months of the fundraising appeal, the pedestal was fully funded, with the majority of donations being under a dollar.

But this was not the first crowdfunding campaign. For centuries, book authors have appealed to the crowd for funding. Kickstarter (the largest crowdfunding site) proudly recounts one of the earliest examples:[2]

In 1713, Alexander Pope (the poet) set out to translate 15,693 lines of ancient Greek poetry into English. It took five long years to get the six volumes right, but the result was worth the wait: a translation of Homer’s Iliad that endures to this day. How did Pope go about getting this project off the ground? Turns out he kind of Kickstarted it.

A Boon for Entrepreneurs

Entrepreneurs discovered crowdfunding as an efficient and exciting method of funding innovative product ideas that were too early for investors. Instead, they reached out to like-minded supporters, early adopters, and technology fans, who were enthusiastic about backing early stage ideas. The crowd not only contributes money to develop the product—but the crowd offers something just as valuable: early market validation for the product, and a chance for the entrepreneur to build reputation and credibility.

Backers embraced rewards-based sites like Kickstarter and Indiegogo because they offered a model that was both engaging and lower risk. Potential contributors discussed the merits of the project or product with each other and with the founders; they were allowed to pre-commit to donations at specific, nominal levels—typically $5, $25, $100, $250—with each level of contribution receiving different rewards. This pre-commitment was important. It amounts to a binding pledge. The entrepreneur sets a funding goal and a time limit. If the pledges meet the funding goal within the time limit, everyone gets charged. Otherwise, no money changes hands. For early backers, this was a critical feature getting them to embrace crowdfunding.

Later, as backers get more comfortable with crowdfunding, other methods of contributing proliferated.

[Note: Use the slide bar to navigate the below chart on the web book. This will get better soon!]

The Many Facets of Crowdfunding

Hundreds of crowdfunding platforms emerged since the early success of Indiegogo (2008) and Kickstarter (2009). It is not necessary to use a third-party platform. Individuals or organizations can raise funds using their own websites, but they still need to incorporate tools for sophisticated payment processing, managing contributors—and attracting a crowd.

But those figures are for all kinds of crowdfunding campaigns—including those that are for charity, community, and personal projects. To get a sense, realistically, of the kind of projects that are funded through the most popular crowdfunding platforms, let’s take a look at Kickstarter—who publishes their data, real-time, for all to see:

Kickstarter provides raw stats about projects funded on its platform, representing the site’s all-time figures since it launched in 2009, and updates this data every day. View the data at https://www.kickstarter.com/help/stats[6]. Below is a summary of the data as of June 12, 2017: 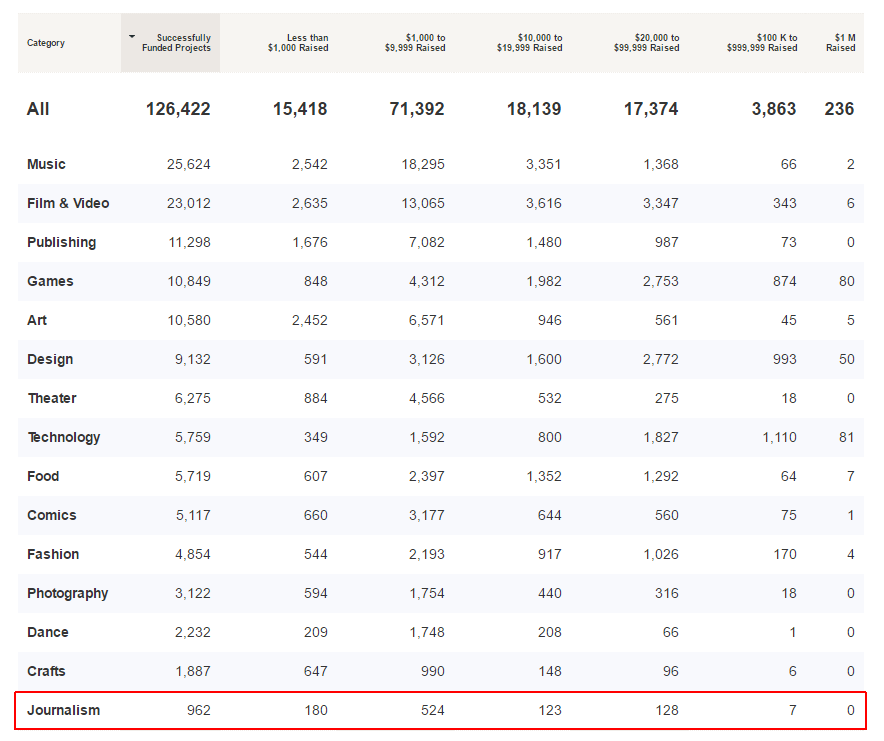 According to Kickstarter, the majority of successfully funded projects raise less than $10,000, but a growing number have reached six, seven, and even eight figures. Currently funding projects that have reached their goals are not included in this chart—only projects whose funding is complete.

In other words—while there are indeed several multimillion-dollar crowdfunding success stories, most campaigns—particularly first-time crowdfunding campaigns—bring in a far more modest figure. For entrepreneurs seeking crowdfunding, well, expectations should be aligned with reality.

Journalism and media entrepreneurs should notice that, since Kickstarter’s inception, a total of 962 journalism projects successfully raised money through crowdfunding, with the majority of those raising less than $10,000.

For entrepreneurs, it’s important to note:

Regardless of the risks and limitations, crowdfunding remains a powerful new way to fund new companies and new projects. But it’s not free money or easy money. Attracting money from the crowd takes significant preparation and significant work. However, unlike other forms of funding, the steps are largely under your control.

Basics of a Crowdfunding Campaign

Yancey Strickler, CEO of Kickstarter, points out that Kickstarter campaigns that reach the 20 percent mark have an 82 percent success rate. If you reach 30 percent, you have a 98 percent chance of reaching your goal.[8]

“Think about that: with less than a third of your goal funded, you have a 98 percent chance of success. These inherently lopsided results require a lopsided approach: you should be putting the vast majority of your efforts on the early or even very—early portion of your campaign.”[9]

The implication here is that you shouldn’t promote a campaign with 10 percent or 12 percent funding to strangers. This also includes Facebook fans, blog readers, or your existing user base. This sounds counterintuitive, but even a die-hard fan can be off-put by poor crowdfunding performance. It’s one thing to mention your new campaign, with one or two small posts, but don’t waste these high-quality leads early on. Save them for when they’ll help the most: maybe before 50 percent, but definitely after you’ve reached a respectable 20-25 percent.”[10]

Then zero in on key demographics of this audience by considering the age range, gender, income, and education level (as applicable) of the pool of potential crowdfunders who could or would back your project.”

Lessons for Entrepreneurs from Crowdfunding

Kauffman Dissertation Fellow Ethan Mollick at the University of Pennsylvania’s Wharton School examined almost 47,000 projects on Kickstarter that raised a combined revenue of $198 million.[12] Mollick concluded that several factors influence whether a project will succeed or not:

Indiegogo took a look at the numbers and statistics behind 100,000 Indiegogo campaigns to see what’s working and what’s not. They offered several tips for campaigns.[13]

Until very recently—under antiquated U.S. securities laws—it was illegal to offer equity (stock) to anyone in the crowd. But then the crowd became a movement, and made history.

Now, crowdfunding is also poised to become a growing source of earliest stage equity financing following passage of the JOBS Act in April 2012. The JOBS Act enabled investors to use the Web and social media to make investments in entrepreneurs and small and medium companies.

On April 5, 2012 President Barack Obama signed the Jumpstart Our Business Startups Act (JOBS Act)—a bipartisan bill that was specifically designed to open the floodgates of funding for emerging growth companies. After nearly four years of regulatory wrangling, the Securities and Exchange Commission released the final rules, taking effect on May 16, 2016.

Equity crowdfunding is the category with all eyes watching. Not only does the new law allow for just about anyone to invest in, not just donate to an emerging startup company—it allows startups to publicly solicit from the crowd. Until May 2016, all this was illegal. Until then, startups had to make the rounds with VCs and Angels, educate them about their industry, pitch, get “warm” introductions. Up until then, an engineer, for instance, who might have recognized the unique potential of a nascent Kickstarter product, could not invest because she wasn’t an “accredited” investor. The VCs and Angels were allowed to become millionaires, but experts who could spot the early potential were not.

The World Bank forecasts a global crowdfunding market of $96 billion by 2025[14]—far more than venture capital and angel funding combined.

Before Kickstarter or Indiegogo existed, there was Spot.us.

Founded in 2008 by a young—but experienced—journalist named David Cohn[15], Spot.us was an online product and a company. It no longer exists, yet Spot.us was one of the most important experiments to emerge from the Knight News Challenge.

Spot.us pioneered community funded reporting: crowdfunding for journalism. Today, this is an easy concept to digest—but in 2008 a lot of people had a hard time understanding the concept. It’s the innovator’s curse.

Stories began as tips from the public giving an issue they would like to see covered, or pitches from a journalist to create a story, including the amount of money needed. Visitors to the website could then donate to fund the pitch.[16]

If, for instance, a local citizen wanted to see an investigative story on the mayor’s past business ties with a contractor, they would post the idea to Spot.us. A journalist browsing the site might be intrigued, and would agree to research and write the story, for an estimated $5,000. People in the community would pledge or donate $20 or $50 each. When the total was met, the journalist would write the story. News organizations could obtain exclusive rights by contributing greater than 50 percent of the funding.

Without this kind of mechanism, important stories and investigative reports might never have seen the light of day. Many services today for freelance writers and creatives—particularly crowdfunding sites—owe their existence to the trailblazing efforts of Spot.us.

For faculty wanting to bring first-hand expertise on funding into their classroom, consider inviting guests including:

Require students to make a grant application to a journalism foundation or set up a Kickstarter campaign during the course of the semester.

CJ Cornell is a serial entrepreneur, investor, advisor, mentor, author, speaker, and educator. He is the author of the best-selling book: The Age of Metapreneurship—A Journey into the Future of Entrepreneurship[18] and the upcoming book: The Startup Brain Trust—A Guidebook for Startups, Entrepreneurs, and the Experts that Help them Become Great. Reach him on Twitter at @cjcornell.

Leave feedback on this chapter.

A method of funding innovative product ideas that are too early for investors. In this method, innovators reach out to like-minded supporters, early adopters and fans, who are enthusiastic about backing early stage ideas. The crowd not only contributes money to develop the product but offers something just as valuable: early market validation for the product, and a chance for the entrepreneur to build reputation and credibility.

Media Innovation and Entrepreneurship by CJ Cornell is licensed under a Creative Commons Attribution 4.0 International License, except where otherwise noted.