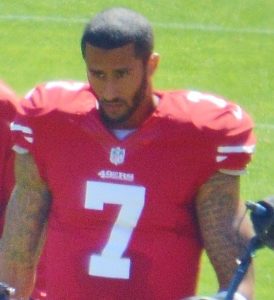 Being an American, you have the right to not stand for it and a recent event happened that the world reacted to. The incident was on live tv at a preseason game where Colin Kaepernick didn’t stand for the national anthem and he’s a well-known football athlete. This caused a lot of attention to him and was disliked by many by doing that but he has the right not stand in every way. I agree that we shouldn’t have to stand for the national anthem because everyone might not have the same beliefs. The author might not do that what Kaepernick did, but we should still understand why he wouldn’t raise up. The examples the article shows are the athletes who also took stands in American history like Jackie Robinson, Muhammed Ali, and Jim Brown. I respect they have pride in showing that because I’d do the same thing, but it draws a lot of negative attention to you.

I also agree that the national anthem shouldn’t be our anthem because as it said me the article “We are numb to the song, the music, and the message. There should be an impact to the message when we stand at attention. And the message is standing for the ideal and what we aspire for America, not always what it is”. This is a powerful fact and everyone does not know and should know the real meaning behind the national anthem and discover what it really means. Sometimes we might learn this by watching people who refuse to stand.

Should We Be Forced to Stand For the National Anthem? (II) by Dillon Lindergren is licensed under a Creative Commons Attribution 4.0 International License, except where otherwise noted.