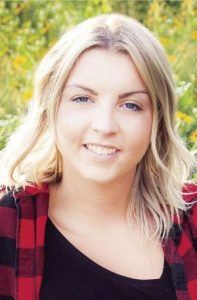 This year has been quite the experience and a damn good one at that! I was in such a rut and just utterly confused about where I was going to take my education. I am so thankful and grateful for the Interdisciplinary Studies Program here at Plymouth State university. This program understands life. Life is unpredictable and can change in the blink of an eye. Did I think I was going to be diagnosed with brain cancer at age NINETEEN? No, of course not. People don’t plan for such drastic life changes at such a young age. And if it strikes your life, you aren’t ready. At least I wasn’t, until I found interdisciplinary studies.

At first I was skeptical about this program because I wasn’t sure what I was actually getting myself into. I felt it was my only option after removing myself from the nursing program, that I worked SO hard to get into. There was no other major in the form of a single discipline that Plymouth State University offered that I felt was “for me”, so to speak. And, I wasn’t about to give up on my education OR waste both time and money on something that my whole heart wasn’t fully devoted to. Madison Roberge, who I graduated high school with, was basically in the same position I was. She is the one who introduced me to IDS and I am so happy she did. I walked into the IDS office a week before classes started, not signed up for any. I assumed the class was going to teach us about IDS, which it did. What I didn’t expect, was to grow such an appreciation and newfound love for IDS.

I went to Inter-Lakes School in Meredith, NH. In seventh grade we learned about the meaning of prefixes and suffixes. The first one we learned was “inter” because of our school name. Inter means between and we were between lakes; Winnipesauke, Waukewan and Squam Lakes. So, I had a sense that this course was a mixture of more than one discipline; combining many different aspects of more than one discipline to create an entire new idea. Throughout the course of IDS my understanding changed. At first, I was taking IDS because I thought it was my only option. But, throughout the semester I realized just how important IDS is. It is SO beneficial to be knowledgeable about many different disciplines because there isn’t a single problem in this world that can be solved with ONE single discipline. I would say that my idea of what interdisciplinary is, is about the same, adding the fact that IDS is a way of life. Sure, it is a way to pursue your education, but it goes way further than that. I would define IDS as a new, necessary, emerging way to learn. I have a strong feeling that IDS will soon become really popular, rather than looked down upon.

I believe my Patient Advocacy program is Multidisciplinary. My program involves more than two disciplines; Health Science, Social Work and Psychology. All three of these disciplines feed off of one another and combined they make one a great patient advocate. Love the analogy Our Textbook gives, of multidisciplinary is like a fruit bowl, where the different fruits represent the different disciplines. Interdisciplinary is more of a smoothie because the disciplines are blended together. Another part of this course I had never thought would be useful, but in reality it SO is, are our ePorts. Our ePorts are where we can post whatever we want, whenever we want. There’s no right or wrong. These ePorts are a way for us to really explain the type of future we want to lead. They express who we are, how we feel, how we learn and SO much more. Personally, I have found my ePort to be a way to cope with my illness. It is never easy for someone to talk about the struggles in their lives, BUT I have found it so much easier to do so through the internet. Before this school year, I was so lost, sad, angry and essentially broken. I was given six months to live and felt okay, why should I even try to further my life if it’s just going to end. Well, here I am, almost TWO years later doing great things with both my education and my life.

I had never ever had a Twitter prior to this course. I didn’t see the need for one because I was already connected with my peers on other social media sites such as Facebook, Instagram, and Snapchat. I didn’t think a Twitter was ever used for anything other than connecting with your peers, family and friends. Little did I know, that wasn’t true. IDS introduced us to PLN’s, personal learning networks. Twitter was a way for us to expand our knowledge and let our voices be heard all throughout the country. We share our personal goals and share how we feel about certain issues going on in the world. We follow people who surround the field we are pursuing. I constantly have TweetDeck open on my laptop now, go figure. For example, I follow @PatientsRising. They advocate the importance of access to vital therapies and services for patients facing life-altering diseases. Get this, they followed me BACK. I just think it is so cool how PLN’s can build yourself a name. Never did I ever think Twitter was such a valuable use of time. Boy, was I wrong.

One of my favorite reads this semester was The Benefits and Challenges of Interdisciplinarity.This read is from Our Textbook. Being interdisciplinary is so much more beneficial than anyone would ever think. It provides creative breakthroughs, crossdisciplinary oversights, disciplinary cracks, flexibility of research and SO much more. I liked learning about how the Social Change and IDS coincide. Being interdisciplinary in this world we live in today is honestly crucial. The world is constantly changing every single second and cannot be solved with one discipline. Also, IDS gives us “freedom to study our interests, in the way we best comprehend knowledge.” We build our careers in such ways that are custom to US, nobody else. The programs we build in IDS are one of a kind. I would be willing to bet that there aren’t any like programs. That’s one of the MANY reasons why I love IDS.

Interdisciplinarity does matter. In universities, there are many students who feel what they want to do with their education, isn’t offered. In my situation, there is no Patient Advocacy program here at PSU. I did a little research and I didn’t find ANY universities that offer such a program. We shouldn’t have to be forced into choosing a major just because. To be honest, if you really think about it, it is just ridiculous to do so. You are spending both valuable time and money; you better be fully devoted to whatever it is you choose. Also, in relation to my situation, life happens. I was in the nursing program here at PSU, but a medical emergency lead to my short term memory loss. “I can’t change the direction of the wind, but I can adjust my sails to always reach my destination.” It is so comforting to know there is an option for people to build the perfect program based on certain disabilities. I learned a couple weeks ago in my Disease Safety and Environment class that people who suffer from short term memory loss most likely will never regain it. That was disappointing to learn BUT I’ve proven many things wrong and I plan on doing so with that, too!

My future is in God’s hands. My sickness is so unpredictable it isn’t even funny. I hope to be the first person to beat Glioblastoma. In the meantime, I will do everything in my power to advocate and fight for every child, young adult, adult and older adult fighting such a disgusting, horrible disease. I am so proud of the person I have become since my diagnosis. I have stopped caring what other people think and or say. Which, I used to care, A LOT. I finally have a voice and I’m going to use it to the best of my ability to fight for what I believe and what is right. This world is full of SO much bad, I vow to believe in the little good there is left. I never thought this until I lived it, but good things can definitely come from bad things. I am getting married next year, September 8, 2018 to my very best friend. We’ve been through hell and back, but we’re here, happy and loving this life we have created. I hope to one day start a family with Michael if I can have kids, otherwise I would love to adopt. I plan on living a long life, making positive differences in the lives of those suffering from cancer.

I hope that the IDS program here at PSU flourishes beyond its expectations and becomes more accepted by businesses. I hope nobody ever looks at a degree in IDS and thinks any less of it. It should be equal with every other degree out there. I hope people start to realize just how important IDS majors are. People with IDS degrees have thought outside the box and created their own program. If that isn’t admirable, I don’t know what is! IDS people have taken a stand from what is thought to be “normal”. Interdisciplinary studies has absolutely, without a doubt change my life for the better.

Editor’s Note: Tiffany passed away from a brain tumor in 2018. The PSU IDS program will always be indebted to her for how much she taught us about learning and about life.

IDS Realizes $h!t Happens!: A Student Reflects on their IDS Experience by Tiffany Richards is licensed under a Creative Commons Attribution 4.0 International License, except where otherwise noted.