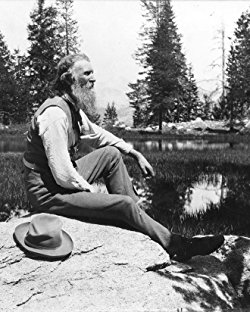 Born April 21, 1838, in Dunbar, Scotland, John Muir is an iconic figure as an explorer, naturalist, writer, and conservationist. At the age of eleven, his family emigrated to Wisconsin in the United States in 1849. There Muir developed his love of the outdoors and become proficient in making mechanical devices like clocks. In his early adult life, he traveled around the U.S. doing odd jobs until he suffered an injury at a carriage shop in Indianapolis, Indiana, when a tool struck him in the eye and required him to remain sequestered in darkened room for six weeks to regain his sight.

After this he devoted his life to exploring God’s grandeur in nature. He walked a thousand miles to the Gulf of Mexico from Indianapolis. He sailed to Cuba, Panama, crossed the Isthmus, and sailed up the Pacific coast, eventually settling in San Francisco, California in 1868.

Muir’s activities and writings while he was in the Sierra attracted much attention. He received as visitors many distinguished persons including Joseph LeConte, Asa Gray, and Ralph Waldo Emerson. Muir had read vociferously of Emerson and the meeting between the two was a delight for both of them: Muir finding Emerson a kind of priest, and Emerson delighted in finding someone living out his Transcendental teachings.

In 1880, Muir married Louie Wanda Strentzel, having two daughters, and ranched for a while in Martinez, California. Ever the explorer, he would travel around the world: Japan, Australia, China, South America, Africa, and many times to Alaska. Muir also wrote prolifically in his later years. Some recounted his travels, others were on natural philosophy, all exhorted that folk go out and experience the gospel in nature.

John Muir and Robert Underwood Johnson, associate editor of Century magazine, spearheaded a bill that Congress pass in 1890, that made the Yosemite area a national park. The bill only made the part of area under national protection, though. In May, 1903, Muir met with President Theodore Roosevelt and the two went roughing it around the area. Muir convinced Roosevelt to extend the park boundaries.

Muir would champion conservation efforts throughout the rest of his life. On December 24, 1914, John Muir died of pneumonia at California Hospital, Los Angeles. Part of his enduring legacy is the Sierra Club he co-founded, which was influential in the establishment of a number of national parks.

Open Anthology of Earlier American Literature by Edited by: Timothy Robbins is licensed under a Creative Commons Attribution 4.0 International License, except where otherwise noted.