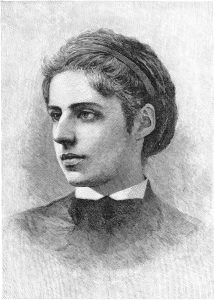 Born July 22, 1849 in New York City into a wealthy family, Emma Lazarus was educated by private tutors. Through this, she gained her love for writing as a teen and grew to be one of the most successful Jewish American writers, publishing and translating German poetry in the 1860’s. In 1866, her father privately printed her work, and in 1867, her first collection of poems, Poems and Translations appeared from commercial press. This caught the attention of well known writer and philosopher Ralph Waldo Emerson. Lazarus published more works such as her second volume of poetry, Admentus and other poems in 1871, Alide: An Episode in Goethe’s Life” in 1874 and a play in verse The Spagnoletto in 1876. In 1880, she was inspired to look more into her Jewish heritage after reading Daniel Deronda written by George Eliot, joining the fight against the persecution of Jews in America. She wrote through poetry and prose publishing a Polemical Pamphlet The Century and Songs of a Semite: The Dance to Death and other Poems in 1882. This was one of the first of her works to really touch on the struggles of Jewish Americans, advocating for Jewish refugees and the creation of a Jewish homeland. During her time, she traveled to England and France. There, she met poets and writers, befriending Robert Browning and William Morris. Upon her return to the U.S., she was asked to write a poem to aid in the raising of funds for the pedestal of the Statue of Liberty. She initially declined and instead she wrote a sonnet commemorating the plight of immigrants, called The New Colossus. The famous lines, “Give me your tired, your poor/ your huddle masses yearning to breathe,” were engraved on the pedestal of the Statue of Liberty in 1903. Her life was unfortunately cut short due to Hodgkin’s Lymphoma at the age of 38 in 1887.

Thou two-faced year, Mother of Change and Fate,

Didst weep when Spain cast forth with flaming sword,

The children of the prophets of the Lord,

Hounded from sea to sea, from state to state,

The West refused them, and the East abhorred.

No anchorage the known world could afford,

Close-locked was every port, barred every gate.

A virgin world where doors of sunset part,

There falls each ancient barrier that the art

Of race or creed or rank devised, to rear

In Emma Lazarus’ 1492, the famous American Jewish poet writes to reflect her thoughts and experiences concerning the “two-faced” year of the ‘New World’ from her own double-sided view as both a Jewish woman and an American woman in the United States. For the year of 1492 holds great significance on either side of her cultural identity, though with very vast contrast between the good and the bad events associated with it. From an American standpoint, Lazarus looks at the year 1492 as a year of discovery – of uncovering America – meanwhile from the standpoint of a Jewish person, 1492 was the year in which all Jews were officially banished from Spain by the Catholic Monarchs of the time – causing displacement of Lazarus’ ancestors but also provoking their immigration to the United States where they would go on to find affluence, a bittersweet tragedy of sorts in their history. In the displacement of the Jewish, refuge was sought but made very difficult to find – they were denied in the West and “abhorred” by the East. Lazarus goes on to praise America as the proclaimed ‘New World’ then, “a virgin world where doors of sunset part” as the Jewish found a place in which they were finally welcome to dwell. The last two lines of Lazarus’ depicts this idea of America as the newly discovered world – where any and all are welcome despite race, belief, or class – challenging the “ancient barrier[s]” pitting discriminatory hatred against such groups that differ from the norm as imposed by Spain amongst other nations at the time. In looking at this poem, the one main critical takeaway is that Lazarus’ depiction of America as virginal, “a virgin world” is not entirely true – America was not prior an empty wasteland awaiting its turn to become colonized, rather it was inhabited by Native Americans whom were mistreated and robbed of their territories by people such as Columbus and his accompanying crew.

Not like the brazen giant of Greek fame,
With conquering limbs astride from land to land;
Here at our sea-washed, sunset gates shall stand
A mighty woman with a torch, whose flame
Is the imprisoned lightning, and her name
Mother of Exiles. From her beacon-hand
Glows world-wide welcome; her mild eyes command
The air-bridged harbor that twin cities frame.
“Keep, ancient lands, your storied pomp!” cries she
With silent lips. “Give me your tired, your poor,
Your huddled masses yearning to breathe free,
The wretched refuse of your teeming shore.
Send these, the homeless, tempest-tost to me,
I lift my lamp beside the golden door!”

Few poems have slipped into American culture as fundamentally as Emma Lazarus’ “The New Colossus”. Written in 1883, this poem was created for an auction to raise money for the construction of the Statue of Liberty’s pedestal, a famous statue gifted to the United States from France to honor America’s Centennial. Being Jewish and having helped Jewish immigrants who fled from pogroms in Russia, Lazarus knew the affects of xenophobia and the importance of the United States being a symbol of Freedom and refuge. You can see this message throughout “The New Colossus”, portraying the ideal that the United States take in all sorts of persecuted peoples, and that this land holds a “golden door” to safety. This message is particularly impactful when you take into account the time-frame of these events. A year prior to Lazarus writing this poem the 1882 Chinese Exclusion Act had been passed and signed by President Chester A. Arthur. This act, meant to appease middle and lower-class Americans who felt as if Chinese laborers were taking jobs away from them, greatly restricted future immigration from China. Additionally, the act impacted Chinese immigrants already inside the country making it so if they left they had to obtain a certificate of reentry prior to leaving, a complicated and difficult task, as well as prohibiting Federal and State courts from granting Chinese immigrants citizenship. Lazarus’ “The New Colossus” became enshrined on a plaque on the Statue of Liberty in 1903, a year after Congress made the Exclusion Act permanent and strengthened it requiring all Chinese immigrants to have a certificate of residence or face deportation.

The poem starts out with a deified description of the Statue of Liberty, glorifying its elegance above that of the famous Greek statue the Colossus of Rhodes, one of the Seven Wonders of the World. Lazarus draws the distinction between how the Colossus of Rhodes symbolized conquest with “limbs astride from land to land”. Meanwhile, her New Colossus, the Statue of Liberty, is portrayed as a symbol of refuge for the persecuted, referring to America’s shores as “sunset gates” and dubbing the Statue of Liberty as the “Mother of Exiles”. While benevolent and kind, this symbol of America is also portrayed as strong and mighty, characterizing Lady Liberty as “A mighty woman with a torch, whose flame, Is the imprisoned lightning.” This worked as an appeal to the patriotism of Americans, allowing for Lazarus to make her more political statement in the following lines. In the final five lines of her most famous work, Lazarus issued a call for the United States to be the idealistic symbol of freedom people now commonly claim it to be. Having Lady Liberty utter the now famous lines, “Give me your tired, your poor, Your huddled masses yearning to breathe free”.

Lazarus’ “The New Colossus” was memorialized on the Statue of Liberty in 1903 and has since entered into United States’ consciousness as a defining piece of literature for American identity. Its lines and inspirational message has since become a sort of rallying cry for refugee and immigration activist movements throughout American history, being a common symbol used to criticize legislation and political actions meant to negatively impact immigrants and refugees. Recently her words have been used to criticize actions taken by President Donald Trump such as his alleged persecution of Hispanic immigrants and his controversial travel ban. Regardless of political beliefs, Lazarus’ poem undoubtedly helped cement the concept of the United States as a symbol of freedom for the world into the American narrative.

Emma Lazarus’ poem The New Colossus is a piece of literature which represents what many believe to be the “American Dream” and what the United States represents. The United States has traditionally been seen as a place of freedom in which those who are oppressed, without rights, or in search of a better life can go and be welcomed. A place where people can escape suppression and through hard work can justly create the life which they want for themselves and their families. The New Colossus recognizes the fact that the colonized Americas are made up of immigrants and states that it will continue to sympathize with newcomers who are attempting to attain the lives which present U.S. citizens or their ancestors had immigrated for. It promises a home that will remain a free state of opportunity for anyone who is willing to work for it. The United States has been seen as a beacon for where people can live in harmony with their differences in lineage, class, religion and culture. A nation free of persecution.

Why do you think that the aspirations expressed in “The New Colossus” have made their way into the common American narrative? Do you believe that the United States has a responsibility to live up to ideals espoused in a poem? Why?

While the United States has traditionally been seen as a place containing all of this ideology, why has this only been true to some groups of people here? What examples of this hypocrisy have there been in U.S. history?

Taking into consideration the principals which the United States were founded on, why do you believe that the views of many U.S. citizens today remain unwavering in their negative opinions of immigrants and groups of people whom are different than themselves?

There are many present day examples of how the view of the immigrant in the United States has been dehumanized and warped. From increasing the difficulty to immigrate to the United States, negative speech about immigrants from elected officials, to bans on specific groups of people being put in place. Why has this rhetoric come to the forefront more recently? Was it always there and was just unrecognized by the mainstream population?

In Emma Lazarus’ poem, she speaks of bringing to the U.S. those who are yearning to be free and those without a home. A group of people whom this specifically reflects are the Jewish. They have historically been persecuted, hunted and chased from their homes. This makes them a nearly perfect example of the types of people that the United States is supposed to be a safe haven for. With this in mind, why does there continue to be antisemitism and attacks on Jewish citizens in the United States today? Think of the 2018 Pittsburgh Tree of Life Synagogue shooting.