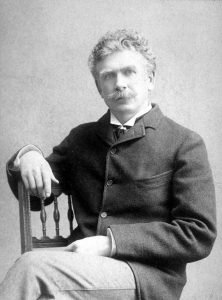 Ambrose Bierce was known for his short stories and poetry. He is often compared to Edgar Allen Poe for his attention to the darker side of things. His main focuses were on the civil war and the supernatural, with a major focus on death. He obtained the nickname “Bitter Bierce” for his inability to softening the truth. He was also known for his forthrightness within his work by writing about the hard to swallow truth. He would write what he felt no matter at whose expense.

Bierce was born on June 24, 1842, in Ohio. He was the tenth of thirteen children; their names all beginning with “A” due to their father’s request. His family later moved to Indiana when Bierce was in high school. He then went to the Kentucky Military Institute. At the start of the Civil war, he then joined the Union army. He fought in many military battles including the Shiloh, Chickamauga, and Sherman’s March to the Sea. Once the war was over Bierce traveled to San Francisco, this is when his literary career took off.

Some of Bierce’s first poetry and prose pieces were in the Californian and he became the editor for The News Letter. He was mainly known for his “Town Crier” column. He became one of the main literary figures around this time in California. He became friends with several other writers, including Mark Twain and Bret Harte.  He then moved to England with his wife where he got the name “Bitter Bierce” for what he wrote in Fun and Figaro magazine. He then returned to San Francisco where he wrote essays, epigrams, and short stories for the Argonaut and the Wasp. During this time, Bierce started writing his experiences during the Civil War.

Through his expression of war came one of his most recognizable pieces The Devil’s Dictionary (1906). In this Bierce expressed his views on many different human values and societal issues. Many people admired him, yet hated the genius behind his work. In 1914 he moved to Mexico as a means of changing his surroundings, but they never heard back from him once he went. They are not sure how his death came about.

A conqueror as provident as brave,

He robbed the cradle to supply the grave.

He fell upon the just and the unjust.

The poem, “An Inscription,” written by Ambrose Bierce, portrays what history defines as a conqueror or even a military power as a whole, and An Inscription shows the reader how there are always two sides to a conqueror and how it is the victims portray their conqueror, and how the conqueror’s nation portrays them. Ambrose Bierce’s two-sided writing style for this poem gives life to the reality that there is, and always will be two sides of a told story.

Have but one God: thy knees were sore
If bent in prayer to three or four.

Adore no images save those
The coinage of thy country shows.

Take not the Name in vain. Direct
Thy swearing unto some effect.

Thy hand from Sunday work be held—
Work not at all unless compelled.

Honor thy parents, and perchance
Their wills thy fortunes may advance.

Kiss not thy neighbor’s wife. Of course
There’s no objection to divorce.

To steal were folly, for ’tis plain
In cheating there is greater gain.

Bear not false witness. Shake your head
And say that you have “heard it said.”

Who stays to covet ne’er will catch
An opportunity to snatch.

“The New Decalogue” is the second version and interpretation poem about The Ten Commandments that Ambrose Bierce had written. The Original piece, titled simply as  Decalogue, was published in 1906. A few years later Ambrose revised the poem and renamed it The New Decalogue published in 1911. Both poems are, in some capacity, an analyze of The Ten Commandments in the order they arrive in the scriptures of the Bible found in the book of Exodus.

Day of Satan’s painful duty!
Earth shall vanish, hot and sooty;
So says Virtue, so says Beauty.
Ah! what terror shall be shaping
When the Judge the truth’s undraping—
Cats from every bag escaping!
Now the trumpet’s invocation
Calls the dead to condemnation;
All receive an invitation.
Death and Nature now are quaking,
And the late lamented, waking,
In their breezy shrouds are shaking.
Lo! the Ledger’s leaves are stirring,
And the Clerk, to them referring,
Makes it awkward for the erring.
When the Judge appears in session,
We shall all attend confession,
Loudly preaching non-suppression.
How shall I then make romances
Mitigating circumstances?
Even the just must take their chances.
King whose majesty amazes,
Save thou him who sings thy praises;
Fountain, quench my private blazes.
Pray remember, sacred Saviour,
Mine the playful hand that gave your
Death-blow. Pardon such behavior.
Seeking me, fatigue assailed thee,
Calvary’s outlook naught availed thee;
Now ’twere cruel if I failed thee.
Righteous judge and learnèd brother,
Pray thy prejudices smother
Ere we meet to try each other.
Sighs of guilt my conscience gushes,
And my face vermilion flushes;
Spare me for my pretty blushes.
Thief and harlot, when repenting,
Thou forgavest—complimenting
Me with sign of like relenting.
If too bold is my petition
I’ll receive with due submission
My dismissal—from perdition.
When thy sheep thou hast selected
From the goats, may I, respected,
Stand amongst them undetected.
When offenders are indited,
And with trial-flames ignited,
Elsewhere I’ll attend if cited.
Ashen-hearted, prone and prayerful,
When of death I see the air full,
Lest I perish too be careful.
On that day of lamentation,
When, to enjoy the conflagration,
Men come forth, O be not cruel:
Spare me, Lord—make them thy fuel.

“The Day of Wrath” by Ambrose Bierce that is pumped full of excitement and dread for the end of day. The entirety  of this poem is Bierce’s way of explaining. in his own dark way, how the end of days shall proceed, and as always in any ending of days work, there is the adage of how the Narrator begs for forgiveness, and henceforth renounces their sins.