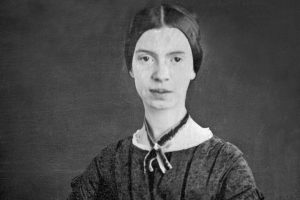 Emily Dickinson was born on December 10, 1830, in Amherst, Massachusetts. Her father, Edward Dickinson was a well known lawyer in Amherst and even a trustee of Amherst College. Her mother, Emily Norcross Dickinson was, a very timid women. Now, although Dickinson’s family had some very close ties to the community, Dickinson was a little different. In her teenage years, Dickinson had studied at a school called Amherst Academy. Just two years before she attended, it was an all boys school. During her years there she studied classical literature, Latin, and even “mental philosophy.” Because of this, Daniel Fiske, the school’s principal had explained her as being, “very bright.” There were many times though, that Emily had to miss school because of illness. At one point, she had only been enrolled into school for just 11 weeks. During her last couple years of schooling, Dickinson had become more distant and off. She had always been a troubled girl, but the constant paranoia of possible danger happening to her, pushed her to the edge. One of the main reasons why she thinks this way is because of her cousin, Sophia Holland. Holland was her second cousin and very good friend. She ended up becoming ill from typhus and died in April 1844. In her last semester at the Academy, she left for home.

When Dickinson was eighteen years old, her family became friends with a man named Benjamin Franklin Newton. Newton was a young attorney and someone Dickinson describes as “fatherly.” Although Dickinson and Newton were not romantic, Newton had thought highly of him and considered him to be a tutor, preceptor, and even master. It is thought that Newton had showed Dickinson writings of William Wordsworth and Ralph Waldo Emerson. After reading her work, Newton thought very highly of Dickinson. Later, Newton was dying of tuberculosis and wrote her, saying “he would like to live until she achieved the greatness he foresaw.” After Newton had passed, she had found out so did her principal Leonard Humphrey. Humphrey had died of a brain congestion at age 25. By this time, Dickinson was withdrawing more and more from the world. In the summer of 1858, she began to review, cleaning, and copying all of her written work. When she was done, she had almost 800 poems. However, no one was aware these poems had existed until after her death.

Open Anthology of Earlier American Literature by Edited by: Timothy Robbins is licensed under a Creative Commons Attribution 4.0 International License, except where otherwise noted.