Scholarly publishing is a broad term that describes the range of activities related to the publication of academic research. For the purposes of this report, we define scholarly publishing as a system, or series of interactions, through which academic writing or research is disseminated and consumed within scholarly communities.

Note that there is a fifth actor in the ecosystem, ebook retailers (Amazon, Apple, Nook/Barnes & Noble, Google, Kobo, among others) that we have purposefully excluded from our research. Our focus is on exploring how technologies can help academic libraries improve scholarly reading.

Below, we describe the role that each group plays in the scholarly publishing ecosystem, and trace their interactions with the other actors. We posit that the interactions between actors are not linear, with content simply flowing from publisher through aggregator to library and finally to reader. Rather, the reader in a research context is also a creator, feeding input back to publishers.

The consumption of content flows directly into creation of more content, which is published and distributed to other readers. This cycle is modelled in the following figure.

An overview of each actor’s role in this ecosystem is described below.

Publishers work to “make public” scholarly work in the form of textbooks, journals, and monographs, and represent a wide range of publishing approaches, business models, budgets, and institutional affiliations. With our focus on monographs, the two most significant groups are large commercial publishers and university presses. These publish the vast majority of monographs in circulation, although in recent years, smaller open access publishers have also begun to emerge.

The role of publishers includes (among other things):

The last of these—distribution—involves direct relationships between publishers and either distributors/aggregators or libraries,  which is typically a commercial relationship. Most publishers of monographs now provide digital files (PDF and/or EPUB) into academic libraries.

The overarching problem for publishers of monographs is one of revenues. In general, publishers report that revenues for scholarly monograph titles are in a downward slope.

It’s important to note that publishers tend to be two removes from the readers, since content/digital files usually go from publishers to aggregators for distribution, and then from aggregators into libraries, who in turn serve the readers. This means that structurally, publishers have little interaction with readers.

However, as publishers acquire content from the same people who consume their published works, there is a separate relationship between the two which we will revisit in the Readers section.

While publishers create the marketable product (monographs), distributors (known as aggregators in the context of digital distribution) are usually responsible for getting monographs to the places where readers access them: libraries and retailers. (In this report, we focus only on the library ecosystem, and ignore the role of retailers).

Most commercial aggregators (Proquest, Ebsco, and Overdrive) provide complementary digital reading platforms to libraries. However, these are closed-silo systems, which do not allow other tools or systems to build on them. In general our interviews, particularly with readers and librarians, suggest that these digital reading platforms tend to pose signifiant frustrations to users.

Non-profit aggregators (such as Project Muse, JSTOR, and ACLS Humanities e-Book), have not provided digital reading platforms to date.

Libraries are pivotal to the scholarly publishing ecosystem. They are significant purchasers of content from publishers and aggregators, and they are a primary source of published research, archival resources, and other materials for researchers.

Their role in the academic ecosystem is:

Libraries are uniquely poised in that they interact with publishers, aggregators, and readers in various capacities, and they are ultimately responsible for placing books in readers’ hands. Unlike other relationships in the ecosystem, the one between libraries and readers is not a commercial one, as a library’s parent institution typically finances its activities.

However, library budgets have been dwindling over recent years, which has impacted their purchasing decisions. This has been a factor in a strong preference for providing digital access (via publisher or aggregator platforms) over print, since the overhead cost for digital files is far less than print, which requires checkout, shelving etc.

Despite these budget cuts, libraries continue to offer important services to students and faculty at their institutions, providing essential support to the research community.

Readers are, of course, the driving force behind the whole scholarly reading ecosystem.

The most obvious reason is that readers are consumers of content.  Without demand for content from readers, publishers (as well as aggregators and libraries) would have little reason to exist.

However, in the cycle of scholarly publishing as described above, the reader has two critical roles:

Readers are also authors, and they are authors who are driven to publish not for direct financial reasons, but because published original research is the central mechanism of career advancement in academia.  The connection between consuming (reading) and creating (writing) is critical to the academic ecosystem.

Publishers acquire (or commission) manuscripts, which allows them to publish and sell books. In exchange, authors may receive royalties (which range from very small to very large amounts—in the current climate of low sales, it is more often the former than the latter), but they also receive professional validation. Publishing a monograph is critical to career advancement for scholars in the Humanities, and a publisher offers not only an avenue to publication, but also quality assurance, via editorial and peer review, as well as prestige value through their reputation. This relationship is the critical last piece of the cycle introduced earlier.

However, while readers form the linchpin of the scholarly publishing ecosystem, their needs — beyond basic “access to content” — are rarely considered a priority. Readers are indirectly impacted by publishers and aggregators who supply reading and discovery tools, that are often restricted in various ways by digital rights management (DRM). In many cases these DRM-enforced restrictions are in conflict with the readers’ needs. This mismatch of interests has emerged in large part due to the evolution of publishing technologies, the considerable challenges of the shifting digital landscape, and increasing financial pressures on publishers and libraries.

Having explored the scholarly publishing ecosystem and its primary relationships, we can update the cycle as follows: 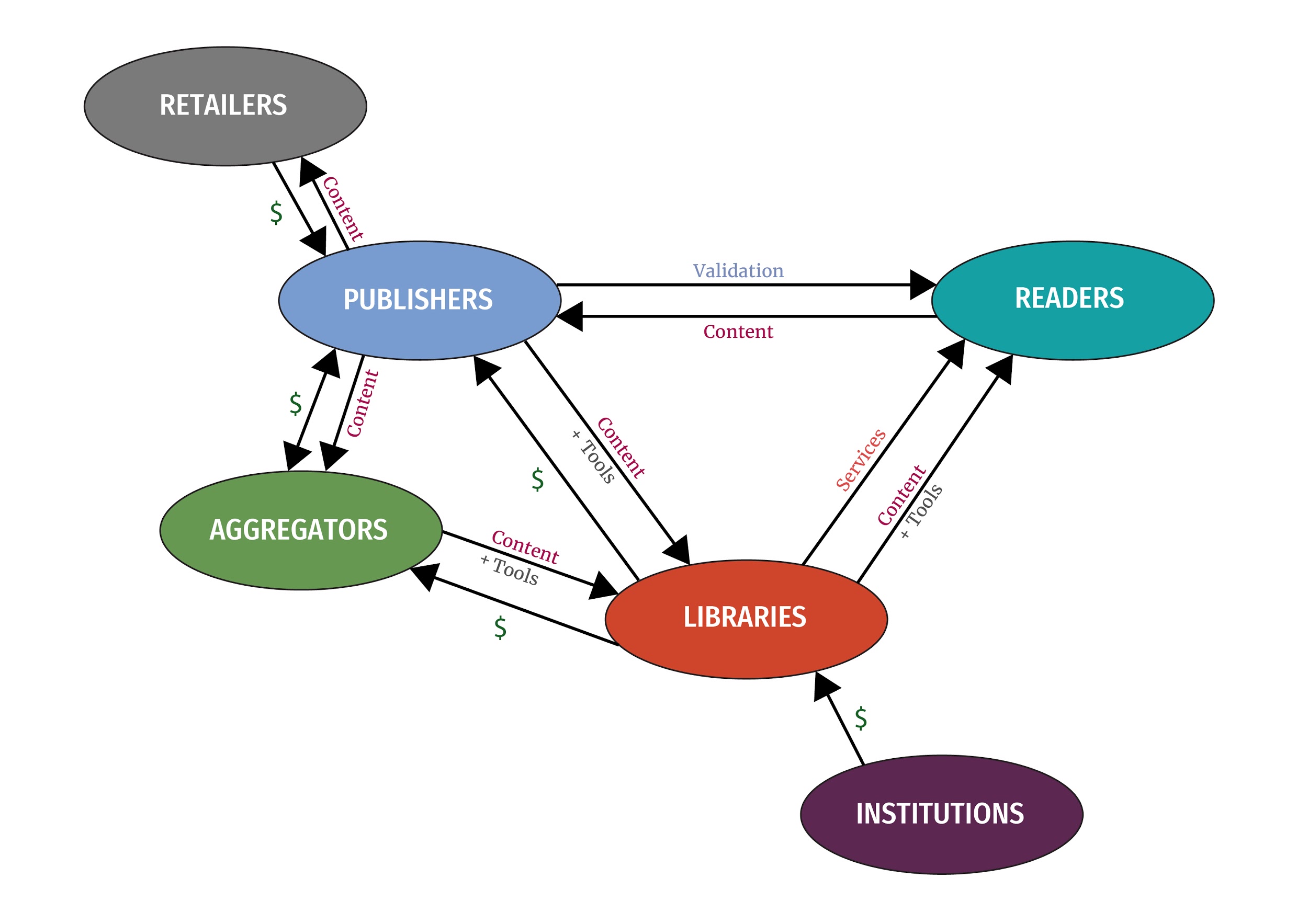 Our project set out to explore and address the shortfall in serving the scholarly reader identified in this section. This shortfall is made clear in two connected points:

From here, this report will consider the experiences of publishers, librarians and readers through a synthesis of interviews conducted with several members of each group, as well as a short online survey aimed at readers. We will then share some of our own philosophy on the future of scholarly reading, then detail the path forward we see for our own work in the area.

An Open Approach to Scholarly Reading and Knowledge Management by The Rebus Foundation is licensed under a Creative Commons Attribution 4.0 International License, except where otherwise noted.