Among other applications, organic chemistry has had a huge impact on the development of modern materials called polymers. Many objects in daily life are composed of polymers; curiously, so are several important biological materials.

Consider a molecule with a double bond, such as ethylene:

Imagine the bond between the carbons opening up and attacking another ethylene molecule:

This long, almost nonstop molecule is called a (from the Greek meaning “many parts”). The original part—ethylene—is called the  (meaning “one part”). The process of making a polymer is called . A polymer is an example of a macromolecule, the name given to a large molecule.

Simple polymers are named after their monomers; the ethylene polymer is formally called poly(ethylene), although in common use, the names are used without parentheses: polyethylene. Because adding one monomer to another forms this polymer, polyethylene is an example of a type of polymer called addition polymers. Figure 16.5 “Some Monomers and Their Addition Polymers” lists some addition polymers and their monomers. One of them, poly(ethylene oxide), results not from the opening of a double bond but the opening of a ring in the monomer; the concept of bonding with other monomers, however, is the same.

Figure 16.5 Some Monomers and Their Addition Polymers 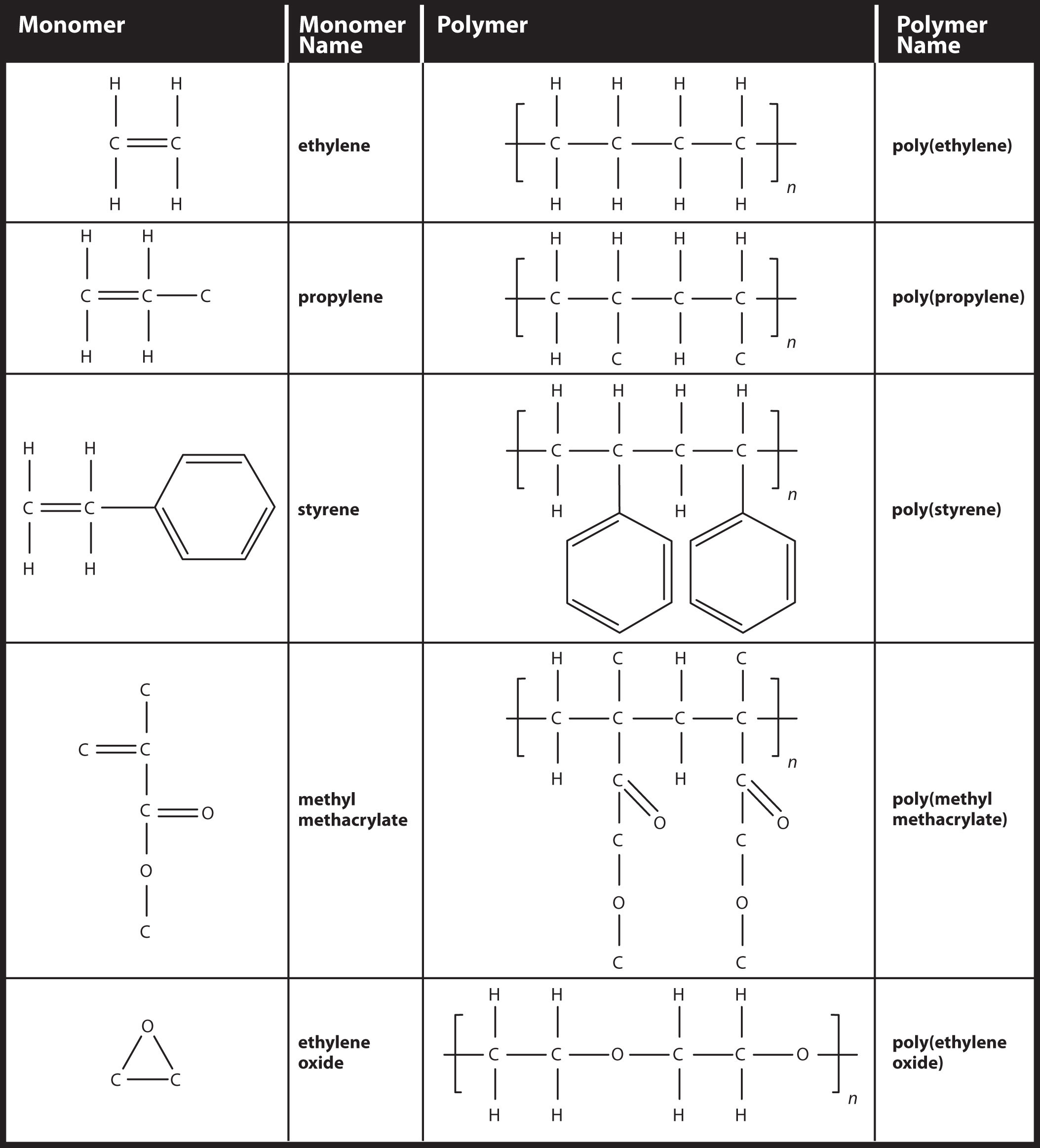 Draw the polymer that results from the polymerization of tetrafluoroethylene.

Solution
In the case of this monomer, the double bond opens up and joins to other monomers, just as with ethylene. The polymer that is made has this structure:

Test Yourself
Draw the polymer that results from the polymerization of vinyl chloride.

Another type of polymer is the condensation polymer, which is a polymer made when two different monomers react together and release some other small molecule as a product. We have already seen an example of this, in the formation of an amide bond:

Related to condensation polymers are the copolymers, polymers made from more than one type of monomer. For example, ethylene and propylene can be combined into a polymer that is a mixture of the two monomers. A common form of synthetic rubber called styrene butadiene rubber (SBR) is made from two monomers: styrene and butadiene:

The physical and chemical properties of polymers vary widely, based on their monomers, structures, and additives. Among the other properties that can be modified based on these factors include solubility in

The uses of polymers are almost too numerous to consider. Anything that you might describe as “plastic” is likely a polymer. Polymers are used to make everything from toothbrushes to computer cases to automobile parts. Many epoxy-based adhesives are condensation polymers that adhere strongly to other surfaces. Polyurethane paints and coatings are polymers, as are the polyester fabrics used to make clothing. Nylon, Dacron, and Mylar are polymers (in fact, both Dacron and Mylar are forms of polyethylene terephthalate [PET]). The product known as Saran Wrap was originally constructed from Saran, a name for poly(vinylidene chloride), which was relatively impervious to oxygen and could be used as a barrier to help keep food fresh. (It has since been replaced with polyethylene, which is not as impervious to atmospheric oxygen.) Poly(vinyl chloride) is the third-most produced polymer [after poly(ethylene) and poly(propylene)] and is used to make everything from plastic tubing to automobile engine parts, water pipes to toys, flooring to waterbeds and pools.

Some very important biological materials are polymers. Of the three major food groups, polymers are represented in two: proteins and carbohydrates. Proteins are polymers of amino acids, which are monomers that have an amine functional group and a carboxylic acid functional group. These two groups react to make a condensation polymer, forming an amide bond: 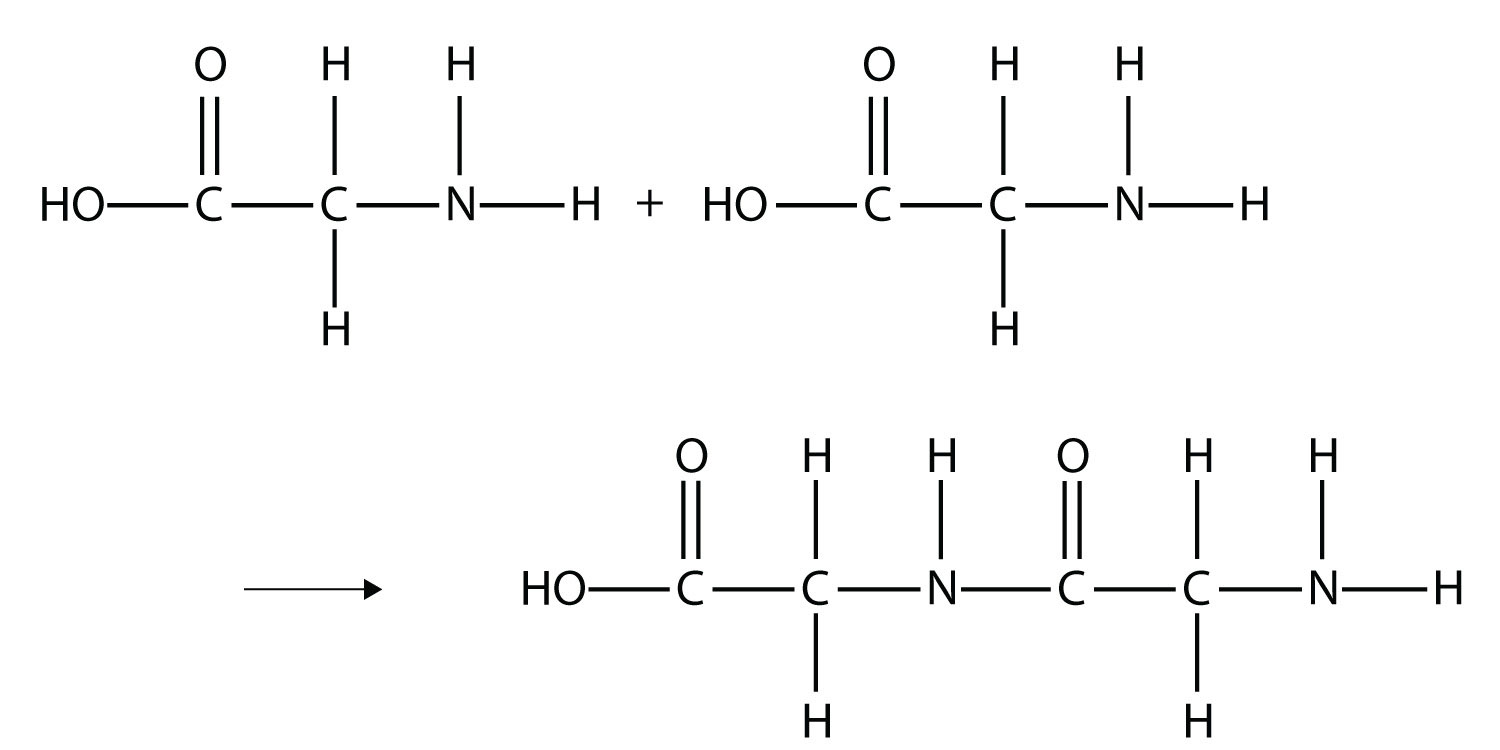 Proteins are formed when hundreds or even thousands of amino acids form amide bonds to make polymers. Proteins play a crucial role in living organisms.

A carbohydrate is a compound that has the general formula

. Many carbohydrates are relatively small molecules, such as glucose: 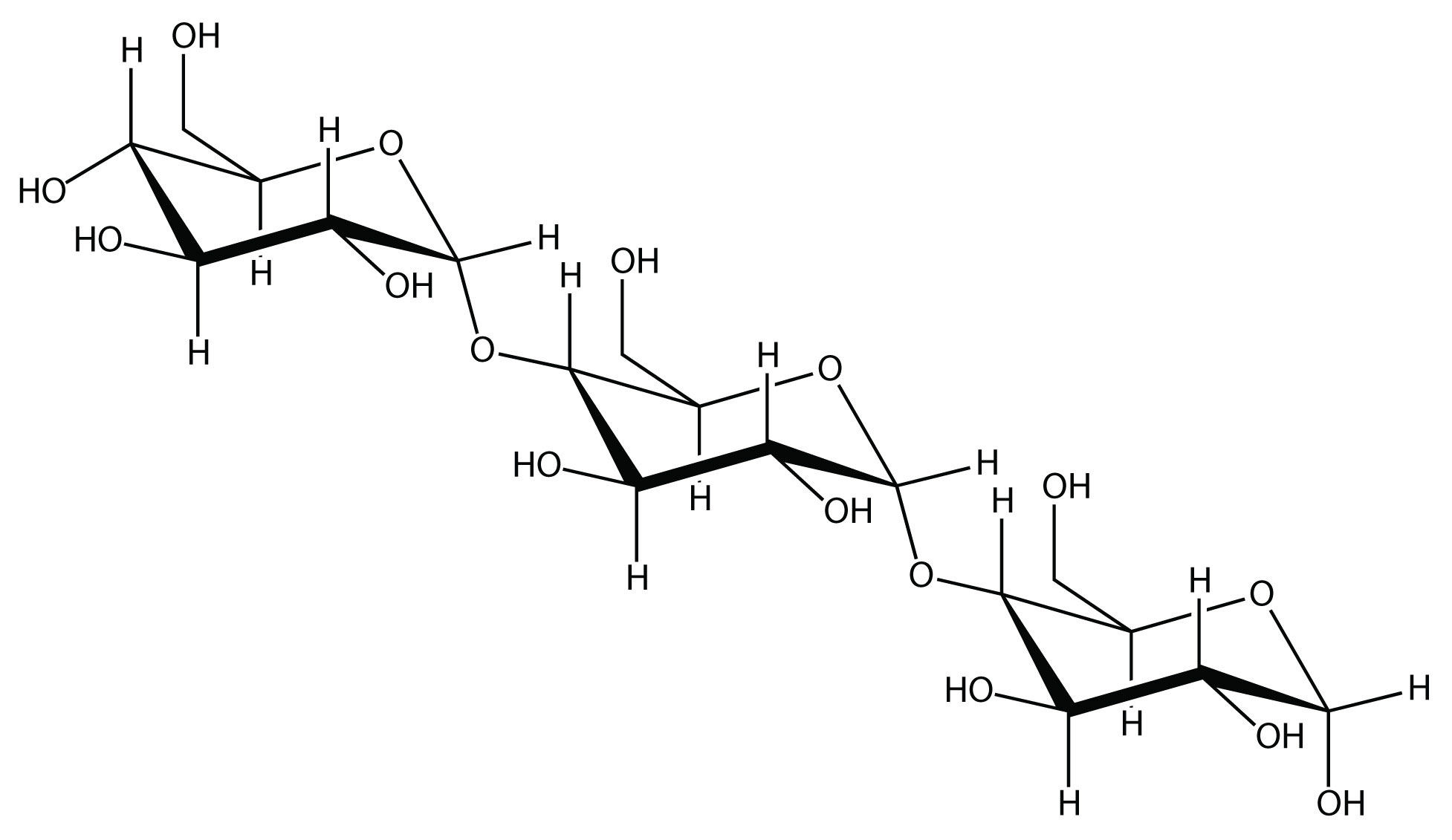 Starch is an important source of energy in the human diet. Note how individual glucose units are joined together. They can also be joined together in another way, like this:

This polymer is known as cellulose. Cellulose is a major component in the cell walls of plants. Curiously, despite the similarity in the building blocks, some animals (such as humans) cannot digest cellulose; those animals that can digest cellulose typically rely on symbiotic bacteria in the digestive tract for the actual digestion. Animals do not have the proper enzymes to break apart the glucose units in cellulose, so it passes through the digestive tract and is considered dietary fiber.

Deoxyribonucleic acid (DNA) and ribonucleic acid (RNA) are also polymers, composed of long, three-part chains consisting of phosphate groups, sugars with 5 C atoms (ribose or deoxyribose), and N-containing rings referred to as bases. Each combination of the three parts is called a nucleotide; DNA and RNA are essentially polymers of nucleotides that have rather complicated but intriguing structures (Figure 16.6 “Nucleotides”). DNA is the fundamental material in chromosomes and is directly responsible for heredity, while RNA is an essential substance in protein synthesis.

Answers1.   A polymer is many monomers bonded together.

11.   Starch is composed of many glucose monomer units.

13.   Proteins are polymers of amino acids, which act as the monomers.

A long or larger molecule consisting of a chain or network of many repeating units; formed by chemically bonding together many identical or similar small molecules called monomers.

A relatively small molecule that can form covalent bonds with other molecules of this type to form a polymer.

The process of making a polymer.

A polymer based on a silicon and oxygen backbone.

Polymers by Utah State University is licensed under a Creative Commons Attribution-NonCommercial-ShareAlike 4.0 International License, except where otherwise noted.