An ionic compound is named first by its cation and then by its anion.

Convert between the chemical formula of an ionic compound and its name.

Ions can be single atoms, as the sodium and chlorine in common table salt (sodium chloride), or more complex (polyatomic) groups such as the carbonate in calcium carbonate. But to be considered an ion, they must carry a positive or negative charge. Thus, in an ionic bond, one “bonder” must have a positive charge and the other a negative one. By sticking to each other, they resolve, or partially resolve, their separate charge imbalances. Positive to positive and negative to negative ionic bonds do not occur.

Most cations and anions can combine to form solid compounds that are usually known as salts. The one overriding requirement is that the resulting compound must be electrically neutral: therefore, the ions

combine only in a 1:2 ratio to form calcium bromide,

. Because no other simpler formula is possible, there is no need to name it “calcium dibromide.”

can be named using either the Stock method or the older, classic way of naming.

indicates a molecule where one

anions to form a neutral compound. Its systematic name is copper (II) chloride, where copper’s oxidation number is indicated in parentheses. Its older name is cupric chloride.

The Stock Method of Naming

An ionic compound is named first by its cation and then by its anion. The cation has the same name as its element. For example,

is called  the potassium ion, just as

is called the potassium atom. The anion is named by taking the elemental name, removing the ending, and adding “-ide.” For example,

is called fluoride, for the elemental name, fluorine. The “-ine” was removed and replaced with “-ide.” To name a compound, the cation name and the anion named are added together. For example,

is also known as sodium fluoride.

Molecular compounds are named using a systematic approach of prefixes to indicate the number of each element present in the compound.

The primary function of chemical nomenclature is to ensure that a spoken or written chemical name leaves no ambiguity concerning to what chemical compound the name refers. Each chemical name should refer to a single substance. Today, scientists often refer to chemicals by their common names: for example, water is not often called dihydrogen oxide. However, it is important to be able to recognize and name all chemicals in a standardized way. The most widely accepted format for nomenclature has been established by IUPAC.

(water) can be called dihydrogen monoxide (though it’s not usually). Organic molecules (molecules made of

along with other elements) do not follow this rule.

“Naming Compounds – Part 2” – YouTube: This video explains how to use a chemical name to write the formula for that compound.

Familiar inorganic and organic compounds are often known by their common, or “trivial,” names.

Recognize when it is appropriate to use a common chemical name.

Many chemicals are so much a part of daily life that people know them by their familiar names. Ordinary cane sugar, for example, is more formally known as sucrose, but asking for it at the dinner table by that name will likely be a conversation stopper. Now imagine using its systematic name in the same context: “Please pass the α-D-glucopyranosyl-(1,2)-β-D-fructofuranoside!” But saying “sucrose” would be quite appropriate if you needed to distinguish this particular sugar from the hundreds of other named sugars. And the only place you would come across a systematic name such as the rather unwieldy one mentioned above would be in scientific documentation in reference to a sugar that has no simple common name.

Many common chemical names have very old and intriguing origins, as the following two examples illustrate.

Most people associate the name ammonia

with a gas with a pungent odor. While its systematic name, “nitrogen trihydride” (which is rarely used), tells you its formula, what it will not tell you is the interesting history of its discovery. Smoke from burning camel dung (the staple fuel of North Africa) condenses on cool surfaces to form a crystalline deposit, which the ancient Romans first noticed on the walls and ceiling of the temple that the Egyptians had built to the sun god Amun in Thebes. They named the material sal ammoniac, meaning “salt of Amun.” In 1774 Joseph Priestley (the discoverer of oxygen) found that heating sal ammoniac produced a gas with a pungent odor, which T. Bergman named “ammonia” eight years later.

Arabic alchemy has given us a number of chemical terms. For example, alcohol is believed to derive from the Arabic al-khwl or al-ghawl, which originally referred to a metallic powder used to darken women’s eyelids (kohl). Alcohol entered the English language in the 17th century with the meaning of a “sublimated” substance, then changed to mean the “pure spirit” of anything, and only became associated with “spirit of wine” in 1753. Finally, in 1852, it become a part of chemical nomenclature that denoted a common class of organic compound. But it is still common practice to refer to the specific substance

as “alcohol” rather than by its systematic name, ethanol.

The general practice among chemists is to use the more common chemical names whenever it is practical to do so, especially in spoken or informal written communication. Many of the “common” names are known and used mainly by the scientific community. Chemical substances that are employed in the home, the arts, or in industry have acquired traditional or “popular” names that are still in wide use. Many, like sal ammoniac mentioned above, have fascinating stories behind their names. 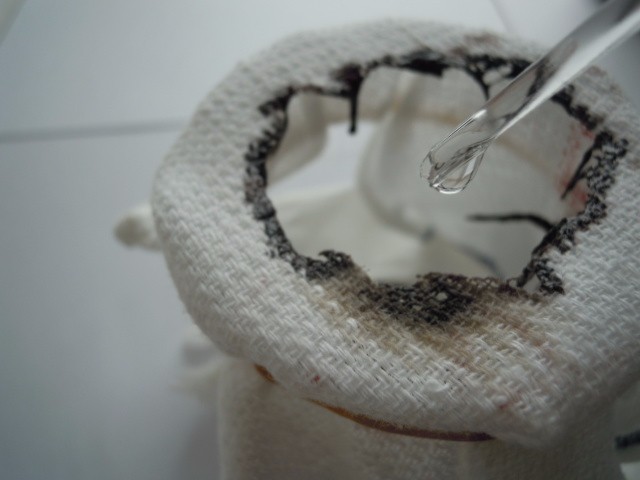 Sulfuric acid: The historical name for sulfuric acid is “oil of vitriol.” Medieval European alchemists prepared it by roasting “green vitriol” (iron [II] sulfate) in an iron retort. Its chemical formula is

A system of naming that includes using Roman numerals to indicate the charge on transition metals.

A set of rules used for forming the names or terms in a particular field of arts or sciences.

Tending to attract electrons within a chemical bond.

Tending to not attract electrons (repel) within a chemical bond.

The name by which a species is known to the general public, rather than its taxonomic or scientific name.

Introductory Chemistry by Utah State University is licensed under a Creative Commons Attribution-ShareAlike 4.0 International License, except where otherwise noted.